PROFESSOR Brian Cox is an extra-terrestrial, it has emerged.

The scientist and pretend human fulfilled everyone’s suspicions by denying the existence of ETs despite extensive anecdotal evidence involving UFOs and crop circles.

Ufologist Mary Fisher said: “We use something called ‘Bowie’s Law’ to work out if a person is an alien.

“If someone is handsome in a non-masculine way, knows way too much about science and is cagey about the existence of aliens, they are essentially David Bowie in The Man Who Fell to Earth.

“Cox fulfils these criteria in spades and is therefore from space.”

Professor Cox subsequently confirmed that he hails from somewhere near Ursa Minor and that beneath the latex ‘human’ suit he looks like a small camel.

He said: “I’m really here to find out if your planet has any good natural resources that my race could plunder before enslaving you. Turns out it does, and the lightspeed battle-cruisers are now on their way. 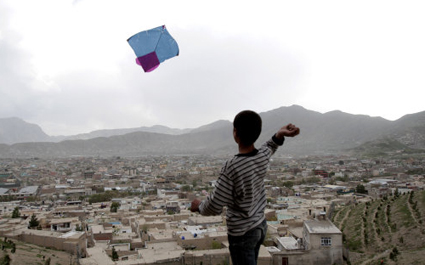 PICTURES of kids flying kites really sum up what is happening in Afghanistan, according to editors.

Newspaper executive Normal Steele said: “Even after all these years, there is still nothing that describes the complex situation out there better than a picture of a kid with a kite.

“He thinks he’s just flying a kite and has no idea that he’s totally symbolic of hope and stuff.

“Plus you’ve got exotic scenery, you’ve got a child and you’ve got something brightly coloured. That’s three boxes ticked for our readership.”

News website editor Emma Bradford said: “Look at this little guy. He’s sad because of all the war but happy because he’s got a kite.

“There is so much emotional impact there, which is great because the rest of our homepage is flashing adverts for hoover bags.”