FANS of Country Life butter have accused their hero John Lydon of selling his soul to corporate consumerism.

The Sex Pistols’ affiliation with a series of new Virgin credit cards has sparked outrage from dairy enthusiasts across the globe.

In a blog post entitled ‘Butter is dead’, Country Life fan Stephen Malley wrote: “John Lydon is a legend of UK butter, but credit cards go against everything butter stands for.

“Butter is supposed to be about sticking two fingers up to the ‘establishment’, and screaming ‘Fuck you!’ to toast. I just can’t believe that the same young firebrand who used to yell ‘I love the taste on me crumpets!’ has become a pathetic corporate shill.

“I took the tub of Country Life out of my fridge and burned it in the garden. It made a weird smell.”

Cultural critic Emma Bradford said: “Back in the seventies, butter was a way for disenfranchised working class kids to express their frustration with lard, dripping and other fat-based types of spread. They wanted a more flavoursome breakfast even if it meant smashing up farmyards.”

Lydon said: “I’m using the money from Virgin to fund new, exciting butter-based projects. People won’t be saying I’ve ‘sold out’ when they see me back on TV advertising dairy products.”

Children told they will watch The Clangers and like it 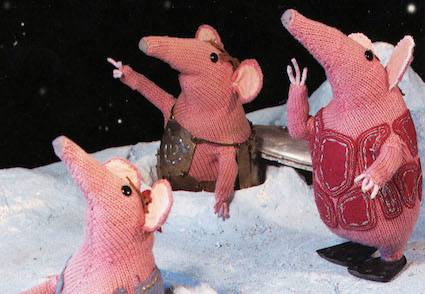 PARENTS have ordered their children to love the new series of The Clangers or find somewhere else to live.

The reboot of the classic show about mouse-like aliens who eat soup starts next week and excited parents across the country have warned that it will be mandatory viewing.

Martin Bishop, from Stevenage, said: “It will be charming and magical.

“They’ve even got Michael Palin doing the voiceover. It’s like a wonderful dream that makes me feel as if life hasn’t quite succeeded in crushing me under its gigantic, cast iron heel.

“Anyway, I’ve told my four year-old son that if he doesn’t like it then we’re probably not related which means that mummy was having an affair, we’re getting divorced and he will have to go and live in the attic of a derelict hospital.”

Four year-old Sam Bishop said: “I saw the trailer and it looks awful. But I lie all the time anyway, so this won’t be a stretch. I imagine there will also be a tedious avalanche of branded merchandise.

“If he asks me to do the Soup Dragon noise in front of my grandparents, I will leave. I’m not some dancing monkey.”