Russell Brand crucifixion ‘could save mankind’

ATTACHING Russell Brand to a big cross would probably sort everything out, it has been claimed.

Researchers found 81 per cent public support for a heroic act of self-sacrifice by the shiny-toothed messiah figure.

Plumber Tom Logan said: “I never understood the Jesus thing – how anyone can do anything of practical value while nailed to bits of wood? – but I am led to believe it really helped fix things.

“Stuff seems pretty screwed at the minute so I’m thinking Russell came along at just the right time. Let’s give it a go.”

Mother-of-two Mary Fisher said: “Crucifying Russell Brand could be the catalyst for a worldwide alternative revolutionary religion based on fairness, love and people being really cool with each other.

“At the very least it would be a big live TV event, bringing everyone together on the sofa with lots of Doritos and dips.”

Brand’s spokesman said he was ‘theoretically open to being crucified’ but only once he has finished work on Arthur 3 and delivered the manuscript to his next book, My Bible-Wible.

Lord Freud tells disabled to rent out their wheelchairs 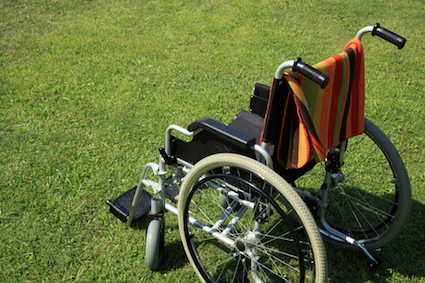 A GOVERNMENT minister has urged disabled people to rent out their wheelchairs when they are not sitting in them.

Welfare minister Lord Freud said wheelchair users could supplement their income when they are asleep or on the lavatory.

He added: “Wheelchairs look like they would be great fun, but I don’t want to buy one. I would be wiling to pay maybe £20 an hour.

“Disabled people would then be running their own businesses, rather than cluttering-up offices and getting in the way of people who are at least worth the minimum wage.”

Martin Bishop, a wheelchair user from Peterborough, said: “If I rent it out between 11pm and 7am I could make £160. That’s not bad. I assume there are millions of people who want to rent a wheelchair in the middle of night.

“And it usually takes me about half an hour to have a shit, so there’s another tenner.

“Who is Lord Freud and why hasn’t he been promoted?”