THE royal family is now the intellectual property of the Walt Disney Company, it has emerged.

The dog and the baby have an adventure

The Duke and Duchess of Cambridges popularity in the US has prompted Disney to add the Windsors to its list of royal characters that includes Princess Elsa, Pocahontas and Simba the lion.

Disney CEO Tom Logan said: After our 100 per cent buy-out, the royal family will be turned into cartoon characters for use in films, lunch boxes and marketing tie-ins with burger chains.

Our first project is an animated feature set in the quaint kingdom of Englandia, where feisty Princess Kate has to rescue Prince Wills from a dragon, which is the sort of mildly feminist thing mums like.

Our animators are redesigning William to make him into a handsome prince in the classic Disney style. This will then be replicated by plastic surgeons to prevent children becoming distraught during his public appearances.

We also have a delightful coming-of-age story involving Prince Harry about a drunken, happy-go-lucky goblin who discovers he is actually an heir to the throne.

Disney is also planning to revamp royal assets such as Buckingham Palace, which will be renamed Magical Windsor World and feature parades of dancing guardsmen led by the Queen in a cartoonised costume of herself.

Logan added: Some royals, such as Princess Eugenie and the Duke of Edinburgh, are proving harder to find a use for, so they are being popped into cryogenic storage with Walt.

Farage clarifies what he thinks immigrants are 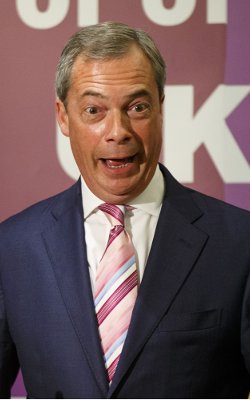 NIGEL Farage has confirmed his belief that immigrants are a type of small, crab-like creature.

“They steal my breath while I sleep”

A herd of so-called immigrants was blamed for the UKIP leaders non-appearance at a conference in Wales after they apparently scuttled across the M4 to reach their mating grounds near Swindon.

Farage said: They’re typically eighteen inches tall with strong grasping pincers and snarling faces. They manage to stay in the periphery of your vision, so for years I thought maybe they weren’t real.

The worst ones, the ‘Romanians’ as I call them, keep you up all night with their guttural territory cries.

It sounds like Jimmy followed by a grunt, hence I call them Jimmy Grunts or immigrants.

There’s one sat on your shoulder right now, touching your ear with its pincer.

UKIP’s general election campaign will focus on eradicating the creatures by the use of warm bitter and cigarettes, as Farage claims they are allergic to both.

He added: “We also want relaxed handgun laws so you can shoot them. It’s common sense as they are plentiful and their meat tastes divine, like that of a young pheasant.”