Everything you 'need' to know about Baby Sussex

ARE you desperate to know every last detail about someone else’s baby? Read our slightly creepy guide.

What will the baby be called?

Despite being a boy, the royal baby will be called Diana, due to the British public’s obsession with the ‘People’s Princess’. Other names considered by Meghan and Harry included Tyson, Adele and Boba Fett.

How much did the baby weigh?

7lb 3oz. If this information in any way enriches your life then for fuck’s sake get a hobby, even if it’s taking photos of roundabouts.

Where is the baby in the line of succession?

Sadly Baby Sussex is only 128th in line to the throne due to having lots of obscure German relatives such as Count Susan Von Grayskull of Schloss Adler, and so is likely to become a pathetic figure like Prince Charles who pretends he runs a business making biscuits.

Can you describe the birth in unnecessary detail?

Yes. Meghan’s cervix would have dilated, allowing Baby Sussex to enter her vagina. After several hours of screaming the baby would have emerged covered in mucus, followed by the royal afterbirth which is due to be interviewed tomorrow by Piers Morgan.

What will the baby be like when he grows up?

Despite Baby Sussex only being one day old, it is reasonable to speculate that he could turn into a goofy bellend like his great-uncle Prince Andrew.

When can I see the baby?

Harry and Meghan are sure to release official pictures soon, or you can break into Frogmore Cottage with a screwdriver and see the baby in person before being wrestled to the ground by four massive ex-paras.

How to build your baby bullshit bunker 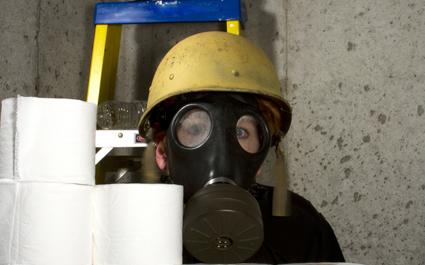 THE Daily Mash presents a step-by-step guide to hiding out until the madness has passed.

The latest royal baby has arrived and you must act quickly to safeguard your family’s sanity as the ensuing bullshit turns millions of ordinary people into maniacs.

Here’s how to construct a simple, media-proof baby bullshit bunker:

Dig up your garden to a depth of 8ft and line the pit with sandbags. These should keep out any TV, radio or internet signals which all contain high levels of baby bullshit.

Cover the top of the pit with decking, which will make it look like a normal garden and deter any Sky reporters from visiting to ‘get your reaction’ to the birth.

Grab tinned food, bottled water and a firearm. Get into the bunker as quickly as possible, otherwise neighbours may force you to attend a celebratory tea party.

Friends or relatives may appear, desperately demanding entry to your shelter and perhaps trying to claw their way in. But it’s too late for them, they are already contaminated and are thinking about nothing except whether the baby will be called Edward or Albert. Use deadly force if necessary.

The hardest part is knowing when to emerge. Lift the decking just enough to see out and look for warning signs like bunting, commemorative floral displays and people wearing Union Jack suits with giant papier-mache baby heads.