It's Dec and Ant, says Dec

DEC is threatening to break up TV’s foremost partnership unless they undergo an immediate name change.

The dispute goes back to Ant and Dec/Dec and Ant’s Byker Grove Days, during which they held a summit meeting at Newcastle’s top restaurant Mickey’s Greaseburger Grill.

A source said: “They agreed that if they became a showbiz success, they would be known as Ant and Dec for the first five years, then switch to Dec and Ant. But now Ant says the ‘time isn’t right’.” 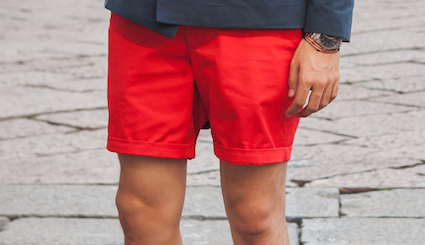 THERE have been sightings of a man walking around in f**king shorts.

Stunned bystanders saw the shorts-wearing man wandering around Bristol city centre, like he did not have a care in the world.

Shopper Tom Booker said: “I swear to God, he was wearing fucking shorts. I turned to my wife and said, ‘that man’s wearing f**king shorts’.

“It was really, really cold. He’s either some kind of superhero or just doesn’t own any trousers.”

Professor Henry Brubaker of the Institute for Studies said: “The only rational explanation is that the unidentified man must have been wearing some sort of two-tone trousers that were flesh-coloured from the knee downwards.

“There’s no way anyone’s going around wearing shorts, not in this weather.”

However shop owner Julian Cook said: “It was definitely shorts. I swear to God.