I&#8217;ve Been This Unbearable Since I Was Eight, Says Winslet

OSCAR winner Kate Winslet last night revealed she has been this unbearable since she was a little girl.

Collecting the award for best actress, Winslet told a cowering audience in Los Angeles how as an eight year-old she would stand in front a mirror, clutching a shampoo bottle and pretend she was 'the centre of the fucking universe'.

She added: "Then I would go downstairs and thank everyone who helped make our kitchen possible before gently pointing out that my rice crispies were the wrong shade of beige.

"And later I'd get one of my little school friends to pretend to be my publicist and make all the other children write pretend articles about how down to earth I was and how, for me, it all starts with a really great script."

Elsewhere the best actor award went to Sean Penn for his towering portrayal of the world's first homosexual glass of milk, while Penelope Cruz, the Spanish hair-style, was named best supporting actress for finally getting her charlies out in a profoundly lesbian way.

An emotional Penn said: "The streets of heaven are too crowded with milk and milk-related products tonight."

But the evening belonged to the millionaire producers of Slumdog Millionaire and their triumphant, feel-good film about stomach-churning poverty.

Director Danny Boyle said: "None of this would have been possible without the untouchable beggars of Mumbai, the little rascals. I just hope this film encourages them to club together their annual incomes and buy a copy when it comes out on Blu-Ray."

Meanwhile Elton John, host of LA's most glamorous Oscar night party, said he was moved by the film, adding that his diamond encrusted slippers enjoyed it too.

Barack Obama Is Not A Chimpanzee, Confirms White House 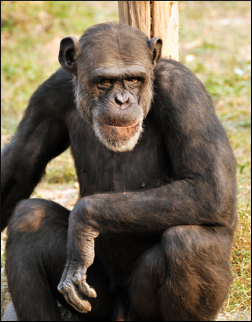 AMERICA breathed a sigh of relief last night after the White House confirmed that President Obama is not a chimpanzee.

Earlier this week a newspaper cartoon depicted police shooting dead a chimpanzee with the caption, 'They'll have to find someone else to write the next stimulus bill' causing widespread concern that the president may be some kind of ape.

A White House spokesman said: "The New York Post cartoon was based on two seemingly disparate news stories – the stimulus bill and the shooting of a violently disturbed chimpanzee by police in Connecticut.

"Based on our investigations, we have established that the New York Post is a populist, conservative newspaper that has doubts over the stimulus bill.

"Its cartoonist clearly believes the bill is so flawed it could have been written by a chimpanzee, or perhaps some other animal such as a pig or a donkey.

"However he has chosen a chimpanzee because that enables him to tie it in, rather cleverly, with the other news story, thereby enhancing both the cartoon's relevance and entertainment value.

"Indeed, if the police had gunned down an angry Connecticut donkey then we may well have been dealing with a donkey-based satirical drawing."

The spokesman added: "I've discussed this issue with the president and he stressed that the cartoon animal looked nothing like him and was clearly a reference to the now deceased New England chimp.

"He also stressed that as he is president people really don't need to be quite so mental about this sort of thing any more."