PRINCE William’s consort Kate Middleton is descended from monkeys and still shares 99% of her genetic material with chimps, it has been revealed.

According to scientists the early Middletons survived on nuts and berries, using their strong prehensile tails to swing from tree to tree.

Later they evolved into a Neanderthal tribe who threw rocks at neighbouring tribes, were terrified of cave bears and thought a solar eclipse was a giant whale eating the sun.

Dr James Cartwright, from the Insititute for Studies, said: “Kate’s more recent ancestors were neckless hominids covered in matted hair. Just several million years ago they were still fashioning tools from mammoth bone and they also had the most horrendous arse-clags.”

He added: “It was all a far cry from Ladies’ Day at Ascot.”

Dr Cartwright said that even today Kate’s DNA is very close to a chimpanzee’s, with only minor variations.

“She’s basically Bubbles in a Jigsaw coat. God knows what the Queen will make of this.”

Constitutional expert, Phyllis Agnew, said: “Kate is devastated that this has finally come out. She certainly wouldn’t want to be associated with simians, or indeed early cave dwellers who worshipped fire and ate raw wolf scrotum.

‘She’s worked hard to leave behind her monkey origins and it’d be real shame if they spoiled it for her now. Especially as she’s only just learned to stop throwing big lumps of her own shit whenever she gets upset.” 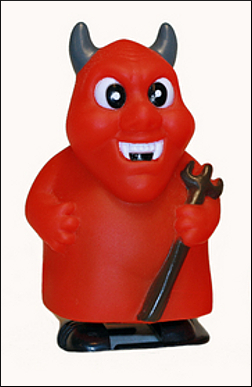 IN a bold, modernising step the Church of England is to offer couples a voodoo water ceremony to protect their bastard offspring from the horned one.

Couples who are getting married in church will be offered a baptism for any children that may have been produced by frenzied bouts of demonic pre-marital rutting, probably from behind.

A CofE spokesman said: "We have to recognise that in the modern world an increasing number of children are vulnerable to Beelzebub until we've soaked their head in some tap water that we've waved our hands at.

"And of course children born outside of wedlock are in even greater danger because Jesus was not there to help daddy put his thingy in mummy's doo-da.

"But if we can at least throw some water at their head when their mummy and daddy are getting married then hopefully they will only be half-possessed by one of the minor demons."

He added: "You can have your entire family unit protected from the Dark Lord and his army of goblins for only £272 + VAT and we'll even throw in a bottle of Diet Fanta and a family-size portion of nachos."

Bride-to-be Emma Bradford, from Stevenage, said: "I'm so relieved that we can have both our marriage and our bastards approved by the baby Jesus.

"In a way it's kind of an apology to God for getting up the duff after swapping my knickers for a bag of chips on the way home from the pub."

She added: "Come to think of it, Joseph was only Jesus's step-dad and I don't remember anything in the bible about the Virgin Mary getting married to God, and if she did then she would have been a bigamist, which is surely worse than my aforementioned chip-induced knicker removal.

"Maybe I should say something to the vicar."