The foetus, four months, has been pictured by the world's media eating lunch in Los Angeles and is already as large as a medium-sized pig.

Presley said she was angered by the press intrusion, but relieved to discover her recent expansion was the result of carrying a big, fat baby.

Writing on her MySpace page she said: "I hate fat people as much as anyone. So it was really hurtful when the British press said I was fat, even though it wasn't me, it was my fat baby."

The singer said she had been forced to reveal her condition, adding: "This should have been an intensely private and personal moment between me, my fat baby and millions of my dad's fans.

"All I really wanted to do was announce it quietly with a $1 million photo-shoot in OK."

Despite the sheer heft of the unborn child, Lisa Marie, 40, said was confident the baby would exit her womb through her vagina in five months time.

"My father weighed eight stone when he was born. But Grandma Presley was back behind the wheel of her truck, that very same day."

England To Be Excused From Sports 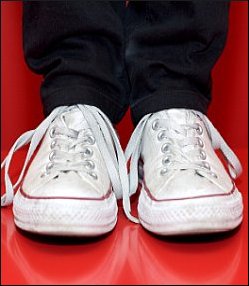 ENGLAND has asked to be excused from sports for the rest of the year after producing a note from its mum.

Senior teachers are still assessing whether the note is genuine, but it seems likely the country will be allowed to use Wednesday and Friday afternoons for study time.

The note reads: "Dear teacher, My England should not have to do sports no more cause it's got an infected toe and a swollen wrist.

"The doctor says it needs to stop doing P.E. and be allowed to sit in the corner with its hand down its pants."

Meanwhile classmates of the slow, awkward country welcomed the decision, stressing that having England on your team was worse than having to play with a girl.

Wales said: "England used to be quite good at sport but now it's all fat and speccy and useless.

"It just stands there in its vest and its crap trainers, looking like a twat."

Wales added: "You know it's time to pack it in when Scotland gets picked before you do."

But Mr Hobbs, the PE teacher, said this was typical of England, adding: "You horrid little turd.

"Strip down to your fatboy undies and climb those wall bars before you get my toe up your arse."