Masterchef 'an elaborate cannibal ploy to fatten up Greg Wallace'

THE cannibals behind TV’s Masterchef planned to eat Greg Wallace when he reached sufficient plumpness, it has emerged.

Suspicions were aroused after Wallace praised every dish that was either a pudding or in a rich sauce, raising questions about why he was employed as a cookery show judge.

A subsequent police raid on the series’ production office revealed recipes and diagrams showing Wallace being variously roasted, broiled or sealed in a plastic bag and dunked into one of Masterchef’s ubiquitous water baths.

A police spokesman said: “Masterchef was run by a cartel of wealthy gourmands who crave the ultimate delicacy – human flesh.

“They’d been fattening up Greg for years but he’s never quite reached maximum edibility during previous series.

“This year the ‘competitors’ – highly-paid employees of the cannibal cartel who deliberately split their sauces to feign nervousness – had been asked to step it up with the short crust pastry and liquid-centred chocolate desserts.

“The genius of the plan was to broadcast it on national television. Recession-hit audiences would consider Greg to be a greedy sod and there would be little public impetus for a search when he disappeared.

“Wallace was one roulade away from death.” 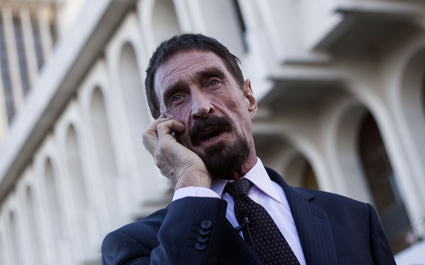 FUGITIVE software boss John McAfee has changed the public’s perception of people who work in IT, it has been claimed.

Network administrator Tom Booker said: “Whatever else you might say about John McAfee, he’s not your stereotypical shy, retiring nerd.

“My colleagues always saw me as a genderless, socially awkward Warcraft obsessive, simply because I know about computers.