Men thank their mothers for not being Denise Welch

MEN across Britain have forgiven their mothers for everything they have said or done after encountering Denise Welch. No history of coke-fuelled rutting

The Celebrity Big Brother winner’s alcohol rages, tearful breakdowns, screaming fits and toyboy intercourse have made men across the UK realise that their mums were actually fine.

Train driver Stephen Malley said: “Every Christmas my mum would drink too much and end up having a massive row with my stepdad which involved taking her top off.

“I was always ashamed, but after seeing Denise Welch go mental at the deeply non-plussed bloke from Reservoir Dogs every night for a week I now realise my childhood was like something out of Peppa Pig.”

Sales manager Wayne Hayes agreed: “I remember cringing as my mum flirted with my mate Dave at my 21st, but if she had been Denise Welch she’d have had him snort coke with her in the toilets and then blown him in the DJ booth. I’ve sent mum a bunch of flowers saying ‘You’re a star’.”

GCHQ in Cheltenham has confirmed that the three weeks when Celebrity Big Brother was on saw a huge spike in men calling their mothers just to say ‘hello’.

Chef Bill McKay said: “When I brought my first girlfriend home my mum told her I wet the bed until I was 16. I hired a hitman but called it off at the very last second because I had just seen Shawshank Redemption.

Wishing Welch, a charity set up to provide counselling to the Coronation Street star’s children, has already collected more than a million pounds in donations, prompting Welch to expose her breasts in celebration. 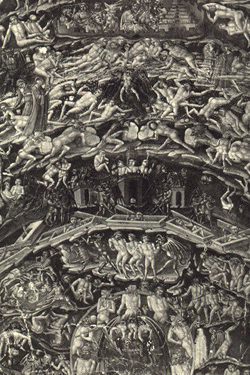 JANUARY is traditionally the month in which my friends and I assess our collections to see which pieces are surplus to requirement and arrange an auction at the Garrick. The footballing fraternity have a similar tradition which I have summarised thusly:

Ravel Morrison, Manchester United to West Ham, £650,000
I see that Mr Morrison is making the journey from Manchester to the dark alleyways of the east end of London and one is reminded of the poet Dante’s journey into the lower circles of hell.

Dante was, of course, guided in his journey by the poet Virgil rather than ‘Big’ Sam Allardyce and one has often thought that Inferno has always suffered from a lack of references to hoofing the ball up into the mixer for the big man as a result.

Roman Pavlyuchenko, Tottenham Hotspur to Lokomotiv Moscow, £7.5m
Pavlyuchenko
was always a misfit in London and reminds one of Nabokov’s observation
of ‘a dull man writing broken English, then a broken man writing dull
English’ if one replaces writing with the playing of football.

He
returns to the spectacular Russian steppes, where the eternal cold and
snow shaped such flinty minds as Turgenev and Solzhenitsyn, and will
hopefully put more of a spring in Roman’s otherwise somnambulant stride.
Seven and a half million is no small amount of money and one can only
hope that both parties have kept their receipts. The High Court is a
depressing place and it smells of wee.

Bobby Zamora, Fulham to QPR, £6m
Zamora is a name steeped in the history of art, from the Piacenza Zamora of Florence who bought a young DaVinci his first painting by numbers book when he was six, to the Zamora Family of Chelsea who terrorised local galleries in the 60s for protection money, threatening them with inferior Hockneys.

Bobby is nearing the end of his career and like many artists he has moved away from the more obvious statements of intent (in his case the vulgar scoring of goals) to a more contemplative reflection on the nature of remuneration and the notional concept of value, as evidenced by his demands for fifty large a week.

Nikica Jelavic, Rangers to Everton, £5.5m
One cannot seriously be expected to contemplate the awfulness of both Glasgow and Liverpool simultaneously without the aid of grain alcohol and a clean lavatory.