BRITAIN has told the Duchess of Cambridge that her pathetically sentimental baby photos should stay on Facebook where they belong.

The firm reminder follows a weekend in which the Duchess released DIY pictures of her offspring, turning the world’s news outlets into her own vast social media account.

Donna Sheridan, from Peterborough, said: “If I was Facebook friends with Kate, then I would be totally cool with having pictures of her oh-so-bloody-perfect children thrust in front of my face.

“That is nature of the binding, unspoken social media contract and I submit to that.

“But as we are not ‘friends’ I regard this as an invasion of my personal space. I am now blocking her from my brain in the hope she finally learns her lesson.”

Meanwhile, Facebook founder Mark Zuckerberg said he was relaxed about the Duchess circumventing his social network, stressing that if it happened again he would just buy her. 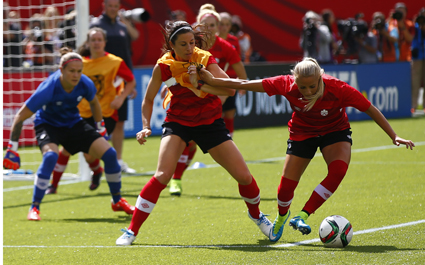 42-year-old Wayne Hayes has heavily criticised female players, despite not having got off his fat arse and run around for decades.

Largely sedentary Hayes said: “The women are doing it all wrong.

“Yes, they appear to be running around and kicking the ball in a football-playing manner, but you can bet they are all thinking about pretty vintage tea parties rather than goals.

“They are ruining the game, and if I had the conviction or physical vigour to play sport on any level then I would show them what a man can do.

“However because of my dodgy knee, my opinions are purely theoretical. A bit like Einstein, if Einstein had some kebab juice on his shirt and only said things that he felt confident his mates would agree with.”