Nick Knowles, and other celebrities proper blokes would have a beer with

TOO much of a ruddy bloke for ponces like Daniel Craig? Want to share a few silent moments of macho silence with a real man? MMA fan Roy Hobbs advises looking no further than these six:

Reality TV is for girls or men who wear slip-on shoes, except DIY SOS. Knowlesy’s gravelly Cockney tones and general aura of ‘come on let’s have ya’ mean you’d have a right testosterone-heavy night down the pub. Women discussed but not necessary.

Technically an actor, but reassuringly can’t act. Refuses to sign up for a movie unless his character gets to punch people, crash expensive cars and shag birds. Would no doubt candidly compare the bedroom talents of Kelly Brook and Rosie Huntington-Whiteley if asked.

Serious footballing hardman Vinnie also appears in films without deigning to do any silly pretending. If I ever see his massive head down my local, you bet I’m going to buy him a pint and it’ll be unspoken but clear there’s nothing gay about that.

He’s never been in a blockbuster movie but singlehandedly won World War Two, so you’ve got to hand it to him. And that hand would probably be throwing up two fingers and smoking a cigar, because he’s a f**king legend.

He might speak Latin and have a secret French surname, but he’s still a lad’s lad at heart. No way would the yawning gulf in class be awkward or he’d rather be talking about poncey art to a girl called Ravennacieza. He’s banter.

Top Gear? They Think It’s All Over? Blind drunk in a pedalo? A real favourite with the ladies? No way would anyone call you a puff if you were hammering pints with Freddie. Then afterwards you could go back to his place.

I am mankind's last, best hope, by Boris Johnson 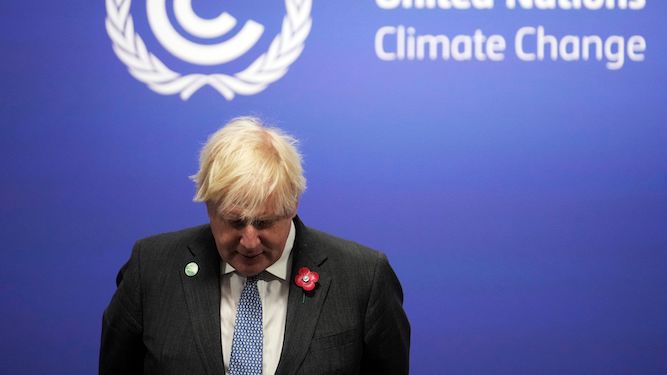 HUMANITY stands trembling on the precipice of extinction. Only one courageous hero stands ready to save us. Only I, Boris Johnson.

After decades of world leaders ignoring the evidence and growing threat – and yours truly, with 20 years in government, was no exception – it is time to awake to the truth. We face annihilation unless I stand in its way.

Who else could carry this torch? Biden’s too old. Merkel’s too severe and she’s leaving. Trudeau did blackface. I’m blonde, charismatic and basically Flash Gordon.

I will take the carbon menace on. I, by virtue of my incredible charisma which works on all peoples and definitely not only on a small slice of English voters, will carry the hopes of the world on my shoulders.

Make no mistake, the world hangs in the balance. Our future is decided this very week. And I hate to say but the prognosis doesn’t look good until my prearranged narrative moves into its triumphant phase around Wednesday.

Carbon will be trounced, drubbed, and knocked into a cocked hat for swift disposal by Glasgow’s excellent binmen. The climate clock will be reset. Carrie will stop banging on about it. Everything will be alright again.

I will be re-elected and also, simultaneously, made Mayor of London. All opposition will disband. I will be named the world’s greatest saviour, easily thrashing Jesus and Tony Stark.

And when people say ‘Does this constant egomaniac self-aggrandising come from your deep insecurity?’ I will reply ‘No, not at all. Who told you that? They’re wrong.’