Noam Chomsky steps aside to make way for Russell Brand

THE world’s most renowned left-wing thinker has decided to retire following Russell Brand’s latest online rant, it has been confirmed.

Noam Chomsky, who has written over 100 books, made his decision following Brand’s new video diatribe in which he accused Boris Johnson of being a “Jihadi John Machine”.

Chomsky said: “Sometimes you have to accept that it is time to pass the baton. Russell Brand has taken political thought to places I could never hope to.

“People might say that he just reads out things off the internet and throws the word ‘dialectic’ in a few times to sound more intelligent, but to be honest, that’s all academia is.

“I may have various honorary fellowships and peace prizes but he has shagged Katy Perry. She’s fit.”

Office stationery supplier Nikki Hollis commented: “Russell Brand has made politics interesting for me, mainly because he talks about it in videos on social media, which means I don’t have to read difficult words in a newspaper.

“I’d much rather be told what to think by someone who is most famous for antagonising Manuel off of Fawlty Towers than by some boring old man in specs. People might listen to Chomsky more if he back-combed his hair and changed his name to ‘Noah’ which sounds cooler.” 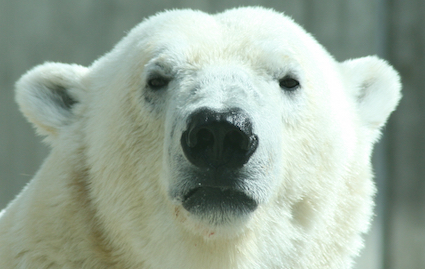 POLAR bears are to be set free into the Scottish countryside for the hell of it.

Breeding pairs have been given shelter five miles outside of Edinburgh and supplied with enough frozen deer to last the winter, with conservationists eager to see what will happen when they get hungry.

Professor Henry Brubaker, from the Institute for Studies, said: “They’ll either head into the highlands to live undisturbed, or by August they’ll be charging down the Royal Mile devouring jugglers like chicken nuggets.

“Either way it will be fascinating.”

He added: “This project will teach us a great deal, although admittedly about the very narrow subject of ‘what happens when you let loose polar bears in Scotland’.

“Science is the bollocks sometimes.”