Next week’s cover story on Amy Winehouse’s heartbreaking love triangle with Jim Morrison and Pete Postlethwaite is the first of many scoops from the sunless lands.

Editor Carolyn Ryan said: Osama bin Laden shows us around his beautiful new home in paradise and introduces us to some of his 72 virgins, Peter Falk talks about his top five heavenly hotspots and we attend some of the glittering social events of purgatory.

We’ve got advice for Kate Middleton on raising a Royal heir from Mary Queen of Scots, Princess Grace of Monaco and Paris Hilton, and there’s an overview of the latest series of Big Brother with Jade Goody and war poet Wilfred Owen.

OK! will also report the celebrity news of the future, with the Katie Price of 2040 giving an exclusive about feeling sexier than ever in her new cybernetic body and how thrilled she is to be marrying the million-strong robot horde of Proxima Centuri.

Reader Emma Bradford said: I do not question the truthfulness of these things, preferring to just accept them with grim obedience and buy the associated products.

At least I’ve heard of some of these people. And I can’t wait to find out the latest about Helen Flanagan’s on-off sexting relationship with the Emperor Caligula. 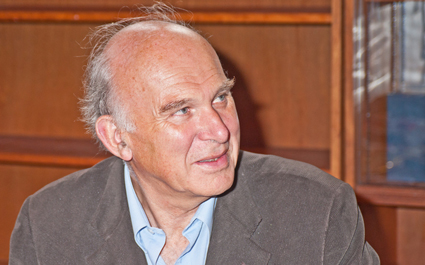 THE government has admitted that business secretary Vince Cable is on a contract which doesn’t guarantee him paid work.

Cable said: “I never know if I’m required to go on Newsnight defending mobile phones companies not paying any tax until Sunday evening.

“I spend most of my time sitting on a stool by the phone, doing little doodles in a notepad.

“David says I’ll be considered for a permanent role when I earn my fifth star for my badge, but I never quite seem to get there.”