Public reminded that actors are full of shit

LISTENING to what actors think is stupid because they are stupid, it has been confirmed.

After Oscar winner Meryl Streep said a gormless thing about diversity, experts stressed that actors are just children in adult clothes and should be left alone to point at clouds.

Dr Wayne Hayes said: “If you want a proper discussion on social power structures you may as well talk to your cat.”

In the early days of Hollywood actors were expected to do nothing more than drink themselves to death and sleep with as many people as possible, but acting schools now teach their students how to bluff their way through questions about things they do not understand.

Hayes added: “You wouldn’t expect Noam Chomsky to be any good at pretending to be the Hulk, so don’t concern yourself with Mark Ruffalo’s ‘thoughts’ about fracking.”

Hayes has called for press conferences with actors to come with a warning, similar to the one about flash photography.

Syrian refugees 'now have no excuse not to return to bombsites' 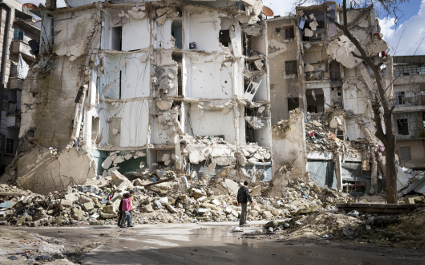 THE Syrian ceasefire means refugees have no reason not to go back to the blasted ruins of their homes, say European leaders.

The ceasefire, which does not include ISIS, other assorted terrorist maniacs or the Russian Air Force, has been hailed as great news for Syrians keen to pick up a broom and start cleaning.

“President Assad says all is forgiven and that whole Arab Spring thing was just a silly misunderstanding.

“And every refugee will get a complimentary tub of Polyfilla to repair any bulletholes in the walls.

“Anyway, off you go! It was lovely having you.”

Syrian Mohammed Zedan said: “I was a restaurateur in Aleppo, so I thought that maybe I should hold back until the infrastructure is rebuilt a little.

“But apparently restaurants are key to gentrifying rundown areas, so that should help to reduce the street-to-street fighting.”