Royal Family only family without racists in it

THE Royal family is the only family in Britain without a single racist member, Buckingham Palace has confirmed.

While every other family in the country, or indeed the world, has at least one older relative making offensive remarks over the dinner table, the Windsors are the only family completely free of racism in any form.

Royal correspondent Eleanor Shaw said: “The Duke of Cambridge’s assertion that ‘we are very much not a racist family’ is both a statistical improbability and entirely accurate.

“While you or I might have a grandparent prejudiced against the Japanese or an uncle who believes we should civilise Spain by carpet-bombing it, William has ruled out any possibility that the Royals are just like us.

“They have no racist uncles. Their older members are racially enlightened and fully accept the idea of white privilege. Even Princess Michael of Kent rails against the evils of the Empire.

“It’s truly remarkable that the most high-profile and powerful family in Britain are also the least bigoted. But there’s no documented evidence to the contrary, for example a senior member making a gaffe with a person of colour, or any pictures of them being carried on golden litters by colonised natives.

“I suppose it’s just another instance where the Royals really are our betters. It certainly gives the rest of us something to aspire to, though, doesn’t it?” 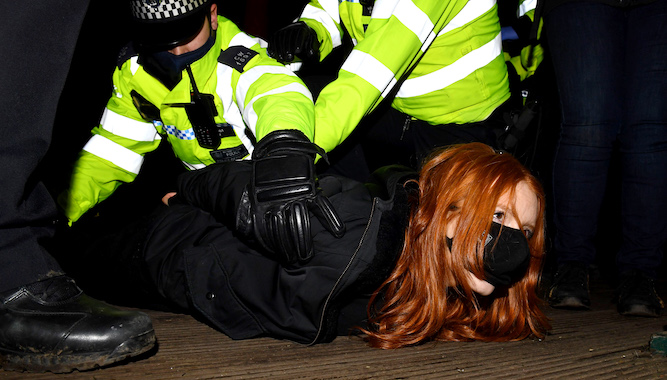 THE Metropolitan Police explained they only violently assaulted a women’s vigil to remind women why they should stay home at night.

Commissioner Cressida Dick asserted that if the vigil had been left to disperse peacefully, like Trafalgar Square’s weekly anti-lockdown rallies, then women would have been given a dangerous message about their ability to freely exist outdoors after dark.

She said: “These women were gathered peacefully, observing social distancing, in contravention of no laws and harming nobody. And as we all know, that’s when women are most at risk.

“If police had stood idly by and allowed these women to return to their homes, who’s to say they wouldn’t have thought they could gather in single-sex groups after sundown again?

“Instead officers moved in and arbitrarily shoved, detained and fined women armed with candles and flowers to remind them that men can do this any time without any consequence.

“None of those women will feel safe or protected on the streets of London ever again. For their own good.

“Arguably our actions have prevented thousands of crimes. And isn’t that what responsible policing is truly about?”