SOME members of the public take any solemn event as an opportunity to throw good taste out of the window. If you’re doing any of these things to remember Prince Philip, reconsider.

Building a crap thing in your front garden

For Remembrance Sunday, people built strange cardboard tanks in their driveways. Philip was in the navy, so someone has surely made a crap destroyer out of boxes and called it ‘HMS Phil’. Or quite possibly put out a creepy mannequin of the Duke that scares children.

Leaving flowers is normal and tasteful, so f**k that. Get yourself down to Windsor Castle and leave a giant teddy bear – what Philip would surely have wanted – or something random, like a bobble hat you knitted yourself.

You can’t genuinely grieve over people you’ve never met, and Philip wasn’t a famous person like Kurt Cobain who articulated the feelings of others. In fact it’s a reasonable assumption that Philip thought feelings were for nancy boys. However, many Brits will not let that stop them acting as if Philip was their best mate.

A funeral is a fun day out

Confuse a funeral with sightseeing at Windsor Castle or Buckingham Palace, mainly taking pictures of the crowds to put on social media to prove you went. Do a bit of gift shopping, round it off with a Nando’s and a great day has been had by all. Except Philip.

Slagging off Meghan and Harry

Ooh, they’re awful, aren’t they? With their Hollywood lifestyle and no sense of duty. If you find yourself making comments like this then get a f**king life. Obviously this does not apply to Daily Mail columnists, who are free to bitchily nitpick every last detail, eg. ‘Was Meghan texting Harry DURING THE FUNERAL in her PLOT to become QUEEN?’

Get out the tat

Now is the time to display your tacky Royal plates and mugs. Maybe stick them in the window with some plastic St George Cross flags? If you’ve got a Union Jack suit complete with waistcoat, like the guy who’s always at Brexit rallies, enjoy wearing it all day even if you look a bit mad.

Kicking a football back, and five other challenges to your masculinity 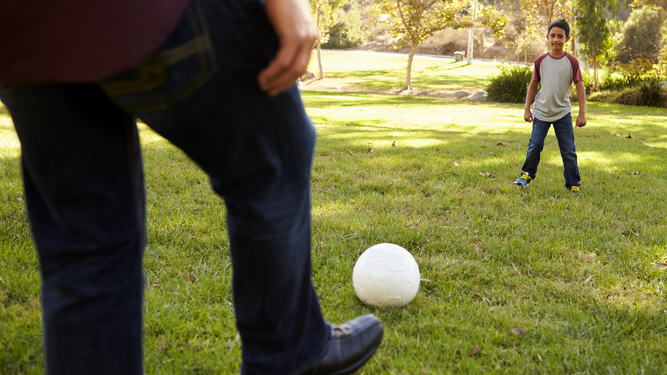 BEING a bloke comes with a hideous array of unreasonable expectations. Consider yourself a failure as a man if you fall foul of any of the following:

Kicking a football back to kids in the park

You’ve always been shit at football, but it doesn’t matter now you’re a middle-aged office worker. Until your attempt to kick a ball back 10 yards goes horribly awry and you feebly hook it in the wrong direction. And a new generation of spotty youths laugh at you.

Being a shit swimmer

Masculine men do a powerful front crawl like David Hasselhoff in Baywatch. You pathetically doggy-paddle your way through the shallow end before clinging to the side for dear life.

Being scared of spiders

The eight-legged nemesis you can never admit to. Because while it’s OK for women to scream and stand on a chair, it’s your job as a man to shut your eyes and flail at it with a shoe, before realising you can’t see it anymore, then spend the rest of the night terrified it’s somehow in your hair or crawled up your trouser leg.

Not being able to drive

It never occurred to you how inadequate you’d feel in adult life by never having got the hang of driving a car and catching buses everywhere. Rue the day you gave up on your teenage driving lessons before asking a real man for a lift into town.

Never having got a tattoo

Only hard bastards and Popeye used to have tattoos. Now they’re practically the law for alpha males like professional footballers and rock stars. It’s far too late in life now, and anyway you’re petrified of needles, so just resign yourself to feeling woefully, if illogically, inferior.

Not your fault, but other people make you feel like it is. Not to mention ‘witty’ jibes like ‘Hope this conversation isn’t going over your head, John’. Sadly there’s no way to win here – even if you get a high-powered, well-paid job and skilfully deal with onerous responsibilities, the morons you’re in charge of will still mutter about ‘short man syndrome’.