QUEEN Elizabeth II, it was revealed yesterday, is exempt from laws by which we plebs must abide. Here are just a few:

The Queen is renowned for being easily bored by any non-horse-related activity. She is required to spend a good deal of her working life staring into space from a pew while an Archbishop drones monotonously into the rafters. And so it was that in 1967 she requested, and was granted, dispensation to roll up a big fat blunt to take the edge off the tedium.

Hold courtier fights for the amusement of her family

The police have been under instructions since 1972 not to interfere with the Queen’s annual pre-Christmas ritual. On December 24th, a ring is set up in the state banqueting room and courtiers are made to fight for the entertainment of the closest members of the Royal Family. As her Majesty’s physical health has declined recent years, Prince Charles has taken responsibility for refereeing.

Due to her mother’s runaway overdraft, the Queen requested special dispensation to walk into any high street bank, wearing a mask to conceal her identity, and demand that clerks hand over large cash sums, using the code words ‘Stick one’s hands up’. A Palace spokesman said that the Queen had taken advantage of this loophole ‘fewer than a dozen times’.

Swans are aggressive bastards that will attack you if you get near them but, as they are a protected species, you cannot attack them back. The Queen is immune to this law, which means if one hisses at her or flaps its wings angrily, she can give it a good, hard punch in the beak to put it back in its place. And if it’s really naughty, she can eat it.

Kick a serving Prime Minister in the genital area

The Queen is obliged to grant a weekly audience to the Prime Minister and, while she cannot veto any decisions made by the government, since 1962 she has been granted special permission to boot in the genital area any PM she finds vexing. Tony Blair is said to be the most frequent recipient, having been kicked in the bollocks 22 times, though Boris Johnson had already racked up 21 punts to the gonads by the time his much shorter tenure came to an end. 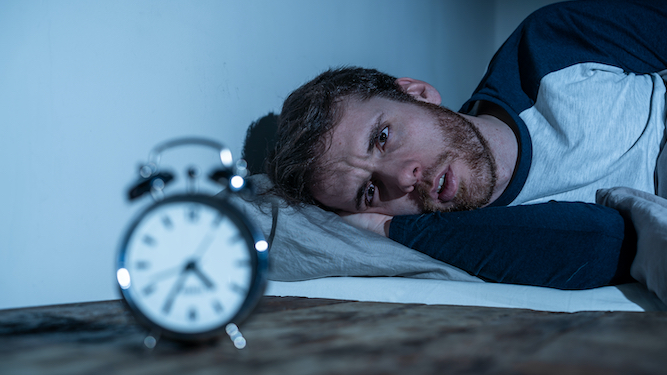 A MAN has started going to bed earlier so he has more time to run through the ever-expanding list of things he needs to worry about.

Tom Booker, aged 36, used to require only 10 minutes to quickly skim through his mental checklist of gnawing anxieties, but, thanks to having two children, a mortgage and living in Britain in 2022, he now needs at least an hour.

Booker said: “It used to be easy. I’d switch the light off, worry a bit about an email I hadn’t sent or something, and still have time for an efficient wank before getting my eight hours in.

“But these days it just goes on and on. I have to worry about whether my kids are normal and if my wife is about to leave me for someone less fat, and follow it all with a freak out about whether the weird rash on my nipple is cancer.

“And that’s before I even get onto panicking about our collapsing government, global warming and the increasing likelihood of getting vaporised in World War 3, like that scene from Terminator.

“I’ve tried booze, I’ve tried meditation, but nothing works. So all I can do is go to bed earlier, get through it all and still get enough sleep so I’m fresh enough the next day to add a few more worries to the pile.”