TEDDY row teacher Gillian Gibbons is a serial blasphemer who refers to her back-passage as 'Jesus', the Daily Mash can reveal.

Gibbons, 54, calls her vagina 'the hairy Virgin Mary' and nicknamed her last boyfriend's penis 'St John the Baptist' for reasons too disgusting for the internet.

One friend said: "She knew exactly what she was doing when she named that poor bear Muhammad. She once sent me a Christmas card with 'God is cock' written in it."

Nikki Hollis, who taught with Gibbons at a primary school in Liverpool, said she was forever encouraging her pupils to take the Lord's name in vain.

She said: "I once went into her class and she had spelled out the words 'piss-Christ' in fuzzy felt and was getting the kids to sing it over and over again while she played the guitar.

"She always had a teddy nailed to a crucifix in her room, and after the class hamster died she told the children that it had been kicked to death by angels."

Molly Jensen, the headmistress at Gibbons' previous school, said she had no doubt the teacher had set out to offend and called for her to be beheaded on her return to the UK.

She said: "The only reason she was in the Sudan was because I asked her to leave after telling a class of five year-olds that the Holy Mother was a lying slut who took it up the shitter.

"I wanted her stoned in the playground, but the governors said no."

Meanwhile, an elated Mrs Gibbons said: "This is all just a silly misunderstanding, I never meant to name the teddy bear Muhammad, just his cock." 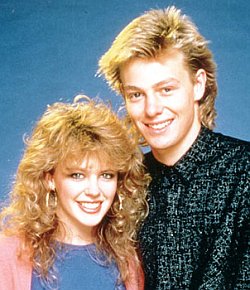 THE BBC has responded to huge public demand by spending £50m of license payers money on a piece-of-shit soap opera set in Australia.

Director General Mark Thompson said millions of viewers have written and emailed the corporation demanding a replacement for Neighbours because their televisions are stuck on BBC1.

Thompson said: "As the BBC moves, once again, into the 20th Century, we should seek out new challenges.

"At some point in his career every director general commissions a new piece-of-shit Australian soap-opera. Of course it's a gamble, but I believe Britain is ready for 25 minutes of blonde women in vests."

One letter, from 43 year-old Barbara Farnaham, said: "Dear BBC, I loved the Neighbours, they made me happy and sad.

"But since they went to that other channel I've lost my remote control. Please can you take all my license money and make another the Neighbours so I can be happy and sad again?"

Nineteen year-old Becky Plender wrote: "I likes the Eastenders but it's always so cloudy.

"Can you make the Eastenders in a hot country so they can all wear t-shirts and talk about the club and the second hand car dealership while they're standing next to a swimming pool?"

Thompson has also unvelied plans for a £75 million alternative to ITV's Emmerdale.

Starting next spring, Emmerdail will be set in a rural North Yorkshire community and will follow the sexy lives of a trio of mixed-stock farmers and they're ruthless attempts to secure approval from the Soil Association.