A MAN will not stop name-dropping the only celebrity he has ever met, actor and former ‘hellraiser’ Keith Allen.

Marketing executive Julian Cook met Comic Strip actor Allen at some strange promotional event – possibly for headphones – in 2012, something his friends will never be allowed to forget.

Friend Emma Bradford said: “Every time we go to the pub it’s like the clock is ticking down until Julian reminds us he met Keith Allen. No offence to Keith, but it’s not like meeting Gandhi.

“Apparently he’s a really good bloke, but to be honest I’d never assumed he was a monster or something. The fact is I just don’t spend that much time thinking about Keith Allen.

“I think they only had a quick chat but the way Julian goes on you’d think it was some incredible life-changing experience. I suppose in a way it was because Julian has been extremely boring ever since.”

Cook said: “I’m not always name-dropping Keith Allen. I only mention him if something relevant comes up, like if there’s a TV in the room because Keith has been on TV. A lot, actually.

“Have you ever met Keith, by the way? He’s a really good bloke, and I know that because I met him.” 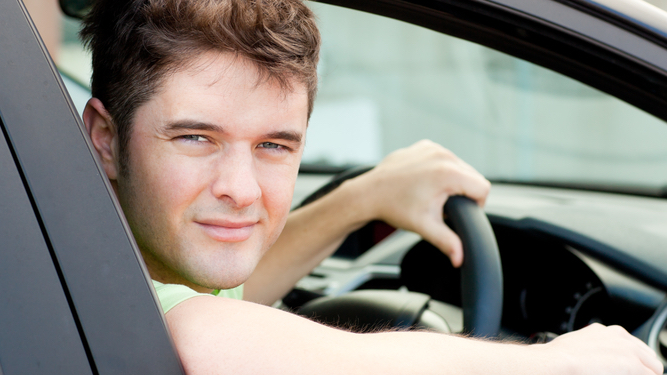 A MAN has proved he is extremely masculine and virile by driving slightly faster than another man, he feels.

Driver Wayne Hayes demonstrated how physically and sexually powerful he was after spotting fellow road user Martin Bishop ahead of him on a B-road.

Sales executive Hayes said: “I pushed the accelerator down and within seconds my car was travelling faster than his car. God, I must have loads of excellent testosterone.

“Just by being ahead the guy was insulting me. I couldn’t let him get away with that so I took my Vauxhall Astra up to almost 50mph. I don’t think there’s any doubt now who has the biggest dick.

“When he caught up with me at some lights I revved the engine furiously. I expect that made him wet himself. It’s a shame he had his windows up because I’d have liked to hear his cries of fear.

“If we had to do a manly thing like a sword fight or killing a dinosaur I’d win. He probably has erection problems too. I don’t, most of the time.”

Other driver Martin Bishop said: “Who is this Wayne Hayes chap? He sounds like a bit of a knob.”