NIGELLA Lawson has asked the US how come she gets barred but Keith Richards wanders in and out like he owns the place.

The TV chef was stopped from boarding a flight to Los Angeles because she admitted to taking cocaine, prompting her to ask customs officials ‘if they were out of their fucking minds’.

She added: “Keith Richards would have regarded the amount of cocaine I took as invisible. It would not have registered on his consciousness. He’s probably still got that much stuck up there and he just can’t be bothered to have it removed.

“And yet he has a house in America. I implore you, look at him and look at me and then explain to me what the fuck you are talking about.”

New exams will make it seem like children are being educated 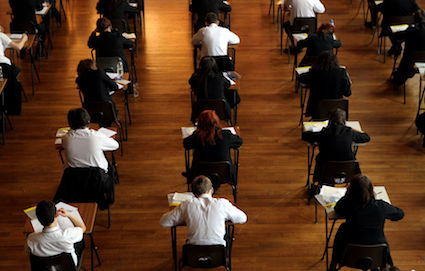 A SHAKE-UP of GCSE grades will give the appearance of children learning things.

Exam body Ofqual and schools secretary Michael Gove have unveiled a plan to create the impression that England has some kind of education system.

Mr Gove said: “The old system of using letters to label exam performance was not generating a sufficiently authentic belief that children were acquiring knowledge.

“By using numbers, in many cases as high as Nine, everyone will think that everything is going extremely well.

“And we can also use it as a benchmark to make it seem as if we are competing with the Chinese.”

Nathan Muir, a 14 year-old from Hatfield, said: “Imagine getting a Nine. You would seem so clever. Much clever than you would seem if you got an A.

“I want to seem Nine clever.”