Newly released pay data from the world-saving organisation showed that Wonder Woman, the group’s only female member, was paid 66 percent of the average male superhero salary and received no expenses or travel budget.

Batman, the team’s treasurer and a billionaire in his secret identity, said: “It’s unfair to call this a like-for-like comparison. The strong dollar means her wages go a lot further on Paradise Island,  so she’s actually taking home more than us.

“Second, a fleet of custom Bat-styled vehicles doesn’t come cheap. Superman’s got a whole Fortress of Solitude to maintain. Aquaman eats lobster for every meal. It all adds up.

“Yes she’s good in a fight, but she’s not really a team player, you know? Always goes home after two drinks, never comes to poker night and woah, don’t mention the strip club.”

Wonder Woman said: “Throwing the Parasite into the sun was my idea, but everyone ignored it, then Superman says it a minute later and everyone’s like ‘Wow, brilliant!’

May rebooted live on air 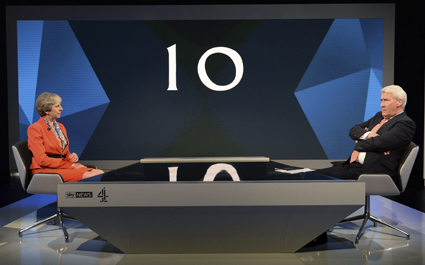 THE moment during last night’s Paxman interview when Theresa May crashed and had to be restarted has been judged her low point by viewers.

Millions watched as an unbent paperclip was inserted into a small hole behind the Conservative leader’s ear and depressed for four seconds to return her to normal function.

Audience member Nathan Muir said: “She was answering a question about police cuts by talking about something completely different, as normal, but the answer just didn’t stop.

“They did a reset and her eyes flashed green for a while, then she revived properly but they still had to wait for a network connection, then she was back up and running.

“It does slightly put me off voting for her, but then Windows constantly crashing puts me off and I haven’t got any other fucking choice there either.”

Campaign manager Carolyn Ryan said: “If she gets any worse we’ll end up going back to factory settings, and on those she still supports Remain.”