CHILDREN don’t like going to school and would prefer not to have to do any work at all, according to a major new study of education in Britain.

Around 60% said they would prefer to play computer games with their friends instead of listening to a man with poor personal hygiene reciting the names of the Kings of England.

The other 40% said they would be happy if they never saw another sum and instead got to sit on the sofa all day watching repeats of Balamory with a a bottle of Tizer and a tube of Pringles “as tall as a house”.

“They are also deeply concerned about global warming, terrorism, the gulf between rich and poor and whether that big fat ginger bastard is going to steal all their crisps at lunchtime again. They think we should stop all those things right now too.”

Eight year-old Paul Bates, said: “I want to live in a castle and have a big sword with magical powers and a dragon I could fly around on and I’d like my friends Rob and Alan to come and live with me although obviously I would be the king and everything and they would just be my slaves. And we would not allow no girls.”

But educationalist Professor Henry Brubaker disputed the report’s findings and cited his research which proved that children should just sit down and shut the fuck up for 18 years.

He said: “Tell them to sit down and shut the fuck up.”

Muslims And Christians To Unite In Hatred Of Gays 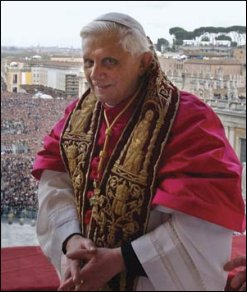 A GROUP of senior Islamic clerics has written to Pope Benedict XVI calling for the world's two biggest faiths to find common cause over their obsessive hatred of gay people.

The Muslim leaders have appealed to Christians to join them in making increasingly bizarre and inflammatory claims about the nature of homosexuality.

The letter states: "Dear Pope – We hate the poofy men more than you. Yes? We think so, but maybe no. Why not we have coffee soon and be finding out?

"You say men with men is disease. We say it caused by devils. It is, how you say, 'potatoe – potahtoe'.

"We also want to tell you and all Christ followers – we love Creationism! Also, let's talk about women and how rubbish they are at everything."

The letter ends: "What world needs right now is much power to religious fundamentalisers. Yes? See you soon. Best regards, the Muslims."

Pope Benedict has yet to respond officially but Vatican sources said the Pontiff read the letter while nodding a lot, pointing to different paragraphs and shouting "yeah! yeah!".

Tom Logan, professor of theology at Glasgow Clyde University, said: "Some people may be wondering why this has taken so long, given that they're all out of their fucking minds in exactly the same way. Probably something to do with money."

The inter-faith project is expected to start with a seminar on the top ten ways to hurt yourself in the name of God.