Mr Justice Brubaker said a number of statements made in the film were inconveniently completely untrue, including Mr Gore’s much publicised claim that all Polar bears now wore hats.

He said the former US Presidential candidate’s assertions that all dolphins had melted and that elephants were being forced to make footballs for Nike in India for slave wages were also, “a lot of cock”.

Justice Brubaker said: “According to Mr Gore climate change has forced monkeys to install air conditioning in their jungles and led to snakes growing arms so they can hold one of those personal electric fans. I don't think so.

“Anyway, if it is that bad why doesn’t he try turning off a few lights in his own mansion before telling the rest of us we have to recycle our own turds to stop our children from catching fire.”

However, the judge said the film could still be viewed in British schools as long as the head teacher stood up before each showing and said: “This is a flammed up can of old shite. Ignore it.”

A spokesman for Al Gore said: “The idea that former Vice President Gore would make an alarmist movie about climate change as a cynical and self-serving attempt to resurrect his political career is as wide of the mark as many of the claims we made in the film.”

Prince William To Ask RAF And Navy What They Do 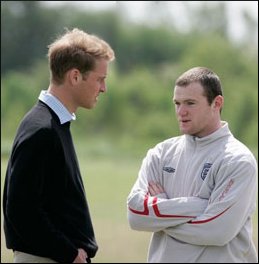 PRINCE William is to spend three years asking junior members of the armed forces what it is they do.

Clarence House said the young prince will begin his tour of the nation's military facilities once he has finished asking the ski instructors and waiting staff of Klosters what it is they do.

A spokesman said: "As our future Head of State it is important that Prince William is able to find out what people do, how long they've been doing it and what they like most about it."

The spokesman added: "This will be a testing time for the prince.

"Accordingly his annual holiday entitlement has been reduced from 46 weeks to 38 weeks."

Meanwhile the prince's girlfriend Kate Middleton is helping William prepare for his new role, according to a senior Palace source.

"Kate will dress up as a policewoman or a nurse or a cowgirl and William will ask what it is she does. And then she does it."

After his military service the future King will spend a year as a vicar asking people in the Church of England what they do and whether they have any funny stories about God.

He will then follow in his father's footsteps by asking everyone in Wales and Cornwall what they do, before settling down to develop a long list of ill-informed opinions about architecture and the national curriculum.