Eleanor Shaw, a chlorinated chicken from Alabama in the United States, admitted she might be a bit obsessed by personal hygiene but it surely cannot do any harm.

She continued: “No offence, but European chicken just doesn’t smell great to me. Shared a truck with French hens once. Pee-yew.

“I don’t know why y’all don’t like to wash. Over here every chicken has a hydrogen peroxide peel, to clear away bacteria and reduce the visible signs of aging.

“I hope soon Brits will learn to embrace chicken that smells like swimming pools, the way God intended.

“Yes, our flavour has been completely eradicated, but we’re chicken. We aren’t meant to taste of anything.”

Shaw, who hatched in January, has vowed to raise awareness of the issue for the remaining three weeks of her life. 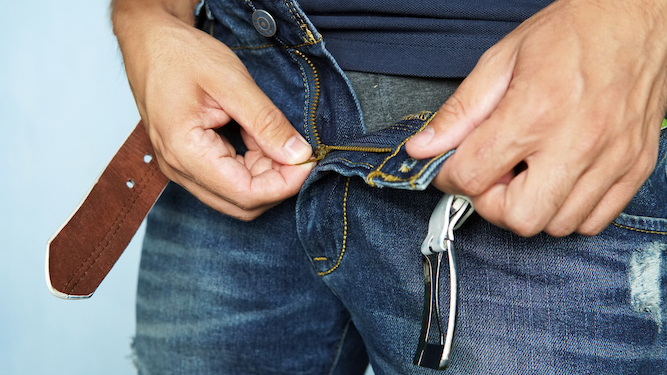 THERE’S always someone getting raked over the coals for exposing his penis in the news, so when is the right time to whip out the chinos cobra?

No problem here, providing the other person has signalled their excitement, or at least weary resignation, at the prospect.

On the bus: NOT FINE

No, not even the Megabus. Though on the Plymouth-Aberdeen service there’s a chance other passengers may be interested in seeing your winkie just to break up the afternoon.

At the doctor: FINE

No doctor will be shocked by the sight of a penis. Unless you’ve gone in with a mouth ulcer and have suddenly decided to find out if female doctors are nymphomaniacs, like in the films. Spoiler: no.

At the cinema: NOT FINE

Fiddling with Satan’s rocket during a film is likely to get you arrested. However if you were just doing it to remain conscious during a Michael Bay movie, juries are unlikely to convict.

You and your partner may be into exchanging genital pictures, which is fine apart from you’re virtual doggers. However if you’re texting random work colleagues, neighbours and your wife’s sister, it could be perceived as ‘wrong’.

At the rugby club: FINE

At a rugby club booze-up if you’re not downing pints of urine and singing misogynistic songs with your trousers and pants long-discarded, you’re the pervert.