Diana Tribute: Millions Unite To Spell Out 'We Miss You' In Gigantic Letters

BRITAIN is being urged to come together to spell out "we miss you" in letters so huge that Princess Diana will be able to read it in heaven.

The 'Big Message' is being co-odinated by the Cabinet Office in conjunction with the Daily Express, OK! magazine and LivingTV's Most Haunted.

Justin Toper, the Express astrologer, has confirmed that Diana will be able to see the message from her villa in heaven, while the size of the letters has been calculated by former Tomorrow's World presenter Philippa Forrester.

The message will begin in the Lake District and skirt along the western edge of the Pennines before descending through the Midlands and into the South East.

The emotional tribute will end with a 45-mile-long exclamation mark running from Maidstone to Horsham.

To ensure maximum visibility every volunteer will be given a bright yellow tracksuit and baseball cap sponsored by one of Diana's favourite charities, the Dove Campaign for Real Beauty.

A Big Message spokesman said: "We've gone for jolly, playful lettering to reflect that side of the Princess's character.

"Diana liked nothing more than shopping in Knightsbridge, having a light lunch with a close friend and then phoning the Daily Mail and accusing Prince Philip of trying to kill her."

The Prime Minister said: "This is a once in a generation opportunity for this country to come together and send a message to heaven. This will be Britain's Apollo programme."

Mr Brown is expected to travel to Matlock in Derbyshire where he will join the bottom half of the letter 'I'.

'If I Cuddle An Aids Baby Will You Let Me Live?' Camilla Asks Mob 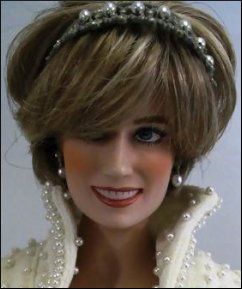 THE Duchess of Cornwall has offered to cuddle an AIDS baby in public if it will prevent her being dragged through the streets by a blood-thirsty mob.

The last ditch offer comes as mob leaders called for Camilla's surrender so they could drag her by the hair from Clarence House to Diana's favourite restaurant in Knightsbridge and then set fire to her.

The mob, including Gordon Brown, David Cameron and the Archbishop of Canterbury, dismissed Camilla's offer to stay away from the Diana memorial service, insisting that only her fiery death could give them comfort.

A spokesman for Camilla said: "What more can she do? She has already cancelled her visit to the Henri Paul memorial service and offered to wear a Diana mask at all future public engagements.

"She has even promised to sell her white Fiat Uno, and she really loves that car. It's a good little runner despite being dinged by a Merc a few years back."

But Conservative leader David Cameron said: "Look, I'm not going to pretend this isn't a difficult issue, but I do believe, very strongly, that the public execution of the Duchess of Cornwall will help the country to move on."

Archbishop Rowan Williams added: "She don't care nothin' for Diana. She finks she's queen already. We're all down here crying 'cause of it bein' 10 years since everythin' and she's just havin' a laugh. I'd set fire to her and I know that Jesus would totally up for it."

Prince Charles expressed regret at the furore surrounding his wife before flying to Austria to look at a range of possible replacements.