Families getting away from all this Covid nonsense with a nice tramp through the woods are tutting judgmentally at other families, who are selfishly ignoring pandemic regulations to invade rural areas.

Julian Cook said: “The car park of the Rambler’s Retreat was absolutely full by 10am and I had to leave the Range Rover in a passing place up the road. So bloody irresponsible.

“There’s nothing else to do in lockdown, so we thought we’d head out for a bit of a wander. Except, just like the last three weekends, it’s been absolutely ruined by all these thoughtless idiots.

“We’re just going to stay home next weekend. Or that’s what we’re telling everyone, then we’ll sneak out while it’s nice and empty. Clever.”

Rural resident Susan Traherne said: “It’s nose-to-tail out there. We’re popping into Leeds for a stroll around the deserted streets instead.” 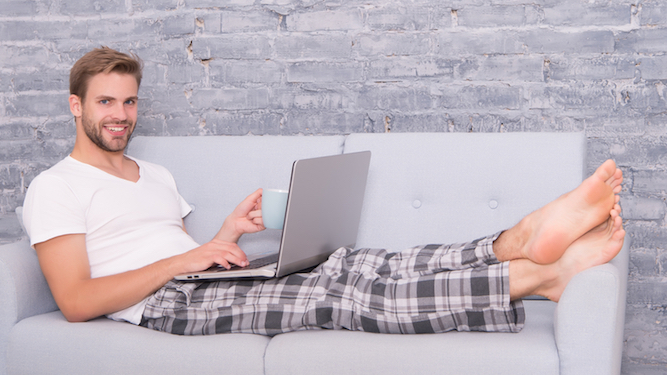 JUST realised your boss emailed several hours ago asking you to do some pressing work? Fear not, here’s how to lie your way out of trouble.

Sorry, my wi-fi’s down

An absolutely bullet-proof excuse, the gold standard. If you’ve spent the morning dragging Kidderminster FC to the Champions League final on Football Manager instead of logging on to some ‘important’ meetings, simply say that your wi-fi’s down. You’ll be off scot-free – but remember to text and not email.

Your email went to spam

One for the courageous. Tell your boss that, for some reason, their email with those important spreadsheets ‘somehow got flagged as spam’. If anyone still believes this bollocks excuse, you’ve bought yourself a few hours of premium slacking-off time. Or the sack.

There was a power cut

These days, about 90 per cent of jobs are some nonsense to do with online marketing, and thus impossible to do by candlelight. What could you do, write a letter instead of an email? Just be careful no goody two-shoes colleague pipes up to say they live in the same area and their power’s fine.

I was taking in a neighbour’s shopping

If you stagger out of bed at noon to see that your boss tried calling while you were sleeping off your mid-week hangover, don’t panic. You were helping a struggling elderly neighbour take in a Tesco delivery. Even the stroppiest boss can’t hassle a good Samaritan like you.

Saying that your laptop crashed and it didn’t save an important document that you had definitely completed is a true lifeline of an excuse. Even more plausible if your office is notoriously cheap with their IT and has only provided you with some Windows XP relic to work from home with.

You’ve got a virus

At the very least, your boss will assume you’ve got a computer virus, effectively giving you a day off to sort it. If you’re feeling more ambitious, mumble wheezily and they might think you’ve got the actual virus, allowing you to milk several weeks of sick leave.