THE UK’s farmers are up in arms at government plans to continue handing them large subsidies but to grow slightly different things.

The new post-Brexit agricultural policy means farmers will be paid by taxpayers to grow trees and provide habitats for wildlife instead of being paid by the EU to keep fields empty, and predictably they are losing their shit.

Farmer Tom Booker of Shropshire said: “My family’s been reaping traditional EU subsidies for generations. And now we’re expected to change all that just because we voted for Brexit?

“Encouraging water voles and sand lizards just to prevent environmental collapse and absorb carbon? Not on my watch. If I see a kingfisher I give it both barrels. They’re just vermin.

“Thinking we’re selfless servants of the land, and turning it into some tree-canopied arcadia such as existed before the advent of industrialised farming, just shows these politicians don’t understand the ways of the countryside.

“Our manure-spreaders are fully loaded with liquid faeces, we’ve filled up on red diesel and we’re off to Westminster again, as is traditional.”

Environment secretary George Eustice said: “The agricultural role of the British government is to funnel money to landowners, and I promise you that will not change.” 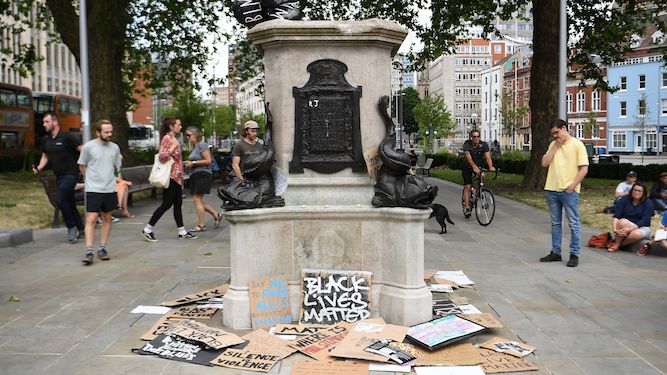 THE ‘Colston Four’ being cleared of criminal damage spells the end of our once great country. Here gammon Roy Hobbs explains why.

Vandalism has been legalised

The ruling has set a precedent for vandalism to be legal. Anyone could scrawl ‘BIGOTED WANKER’ on my Audi if they did it with ‘antiracist conviction’. I’m sure the unwashed lefty students next door did it last time. Them or Mrs Perkins who runs the charity shop.

If we don’t have monuments to old blokes I didn’t give a shit about before all this BLM rubbish, we’ll forget history and the past will be completely erased. Without Edward Colston being honoured I can’t even remember what I had for lunch yesterday.

None of our statues are safe

We’ll have to form vigilante gangs to guard our precious statues from Marxist nutters intent on desecrating them. How long before someone welds a giant cock to the forehead of Sir Winston Churchill in Parliament Square? No, it wouldn’t be hilarious. That’s treason, mate. I’m reporting you to the police.

Mobs will decide everything

This verdict means we’ve accepted mob rule, so a mob will decide everything. Do you want to have to wait for a mob to turn up and tell you whether you can go to B&Q on Sunday morning to return a faulty drill bit? Well get used to it, because that’s definitely going to happen.

Wokeness is now a defence in the eyes of the law

You can get away with anything if you do it in the name of ‘wokeness’. Even murder, probably. Although murder doesn’t sound very woke. That’s the kind of thing that snowflakes cry about, isn’t it? A murder is what started this whole thing. Hang on, I’m confused now. Again.