Flood victims finally getting the blame they deserve

PEOPLE whose houses have flooded are responsible for most of society’s ills, it has emerged.

As environment secretary Caroline Spelman announced plans for a 10% increase in normal, dry, families’ insurance premiums to cover scrounging flood people or ‘floodies’, many have begun to wonder what else the water rats might be responsible for.

In some areas floodies have been rounded up, put in secure relocation camps for their own protection and forced to wear big blue drip patches on their shoulders so decent people know to avoid them.

Taxi driver Julian Cook said: Im supposed to feel sorry for them when theyre too bloody stupid to have their entire house coated in vulcanised rubber?

These people move to wet areas deliberately, so that when the houses inevitably flood they can sting the insurance companies.

“You see them on telly with their dingies and helicopters. How come they’ve got those things if they weren’t planning it?”

Appearing on todays Jeremy Kyle show are a flooded-out family of four, who will appear above the caption ‘Cant be bothered to close windows when its raining  and you foot the bill!’ while being howled at by an audience of hostile large people.

Housewife Nikki Hollis said: “They are the gypsies of the water. Aimlessly floating around on bits of old wood, claiming benefits and stealing copper.

“They’re not really a part of our society, are they? More like something from the unsuccessful Kevin Costner film Waterworld.

“You know they’ve got gills.” 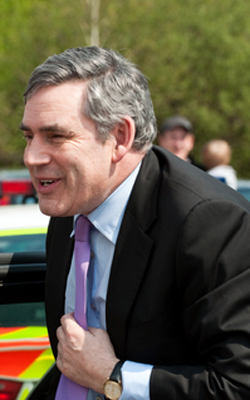 GORDON Brown was painfully probed by aliens at the behest of Tony Blair, government files have revealed.

Declassified Ministry of Defence files show that in 1998 Tony Blair repeatedly met with extra terrestrial humanoids. He apparently paid them £75,000 to kidnap Gordon Brown in their saucer and give him a ‘severe bum drilling’.

A Downing Street source said: “I remember Tony had received a letter from a member of the public who claimed to have had a large whirring implement put up their backside by bulbous-headed aliens.

“Tony said ‘that sounds truly horrible’, then narrowed his eyes and looked across the room to where Gordon was counting coppers into a jar with a face like thunder.”

The following day, Blair arranged a meeting with MOD officials and their secret alien contact, a being called Skylax from the Zeta Reticula star system.

According to the declassified files, Blair supplied the alien with information about Brown’s dog-walking routine, an envelope stuffed with cash and instructions to ‘show no mercy’.

Skylax apparently showed the Prime Minister a bladed instrument called ‘the space corer’ which he used for ‘special deep probing’, in response to which Blair nodded enthusiastically.

The joyless Scottish chancellor was found by walkers on Clapham Common the following morning, naked and confused.

UFO expert Roy Hobbs said: “It’s not unusual to find politicians lurking in parks at 3am so the whole thing was easily brushed aside as a run-of-the-mill gay sex scandal.

“Gordon never knew that Blair had set him up to be anally defiled by space beings. He just thought it was typical bad luck.”