A FRENCH mountain is covered in snow and smug, excitable arseholes, it has emerged.

Awful humans from across Europe have gathered on the mountain to slide down it, creating what looks like a giant prick volcano.

French mountain Hélène Archer said: “I’m up to my summit in total shits.

“Wankers who think they’re gnarly because they’ve spent two hundred quid on a pair of goggles and strapped themselves to an ironing board.

“It’s like I’ve started sweating cretins. At least I get some respite in the night when they all squeeze into the clubs, get on the gak and jump to around to some awful will.i.am track.”

Archer added: “It never ends. A couple of months into spring and I’m crawling with angry dads on mountain bikes. I wish I was a hill or a cloud.” 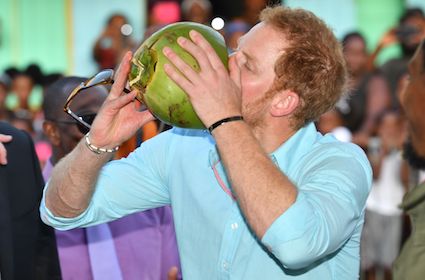 It reads as follows:

11.30am: The boys load into an Apache AH1 helicopter piloted by the stag and fly over ISIS-controlled Syria to see how many bad guys they can bag. First 200 bullets per guest paid for, after that buy your own.

5.45pm: Chosen stripper to become carrier of the Royal Bastard, in accordance with tradition and Game of Thrones.

9pm: Ministry of Sound ‘Garage Classix’ night. The Royal Necking of the E.

10pm: Builders construct a replica of Nottingham Cottage, Harry’s home at Kensington Palace, on the Ministry dancefloor for a Facetime call from Meghan Markle. Harry is propped in front of the screen while an impressionist, copying his voice perfectly, claims they have turned in early. Harry’s drooling mouth is made to move by Hollywood CGI experts for a cost of £5 million.

8am: An unconscious Harry is loaded into Queen Alexandra’s State Coach for the 874-mile horse-drawn journey to John o’ Groats. His naked body is then stuffed into the belly of a dead cow in a nod to Luke Skywalker in Empire Strikes Back.