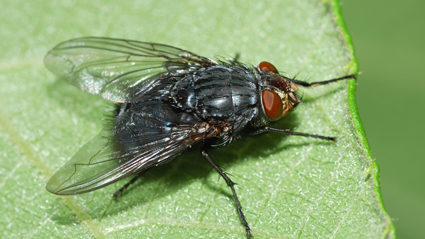 A HUGE fly has announced plans to fly into living rooms in a fast and confused fashion before desperately trying to find his way out again.

Bluebottle Tom Booker said that he hoped to see as many front rooms as possible over the coming Summer: “I’m going to fly in, panic, fly back into the window, briefly fly into the kitchen, panic some more and then fly out again before I get hit hard with a magazine.

“I figure I’ll do this all summer and then go back and take that job doing whatever mature adult flies do.

“Can’t just fly into people’s living rooms and then fly back out again for the rest of my life.”

Booker says that he also plans to land on as much dog shit as possible over the summer, as well as landing on food that is left out at barbecues and picnics.

He added: “Got to let them know where I’m coming from, innit?”

MANY Brexit supporters are confused by Boris Johnson’s negative comparison of the EU to Nazi Germany, it has emerged.

A considerable number of anti-EU voters have a certain fondness for Hitler due to his robust right-wing views and frequent appearances in interesting television documentaries about the Nazis.

Office manager Roy Hobbs said: “I’m strongly opposed to the EU and will be voting to leave, but I don’t see why we have to drag poor old Hitler into it.

“Hitler did some bad things, but it’s not his fault the EU has made Britain literally full of immigrants and shopkeepers have to fill in 20 forms to prove their bananas aren’t too bent.

“In fact he’d have been opposed to a left-wing organisation like the EU and would have crushed Brussels with Stukas and panzers. We should be able to vote for that in the referendum.”

Caterer Nikki Hollis said: “It’s disgusting that Boris is smearing Hitler’s reputation by comparing him to the EU. He’s not even alive to defend himself, although in fairness that is due to the war he started.

“Hitler was better than the EU anyway because he’d got flying saucers and went to the moon. Boris needs to get his facts straight.”