SEAGULLS have cemented their position as humanity’s arch-enemy by opening a lettings agency specialising in ‘luxury studio flats’.

The barrel-chested sea birds have tired of petty fast food theft and are hoping that Winged Lettings Ltd will give them a more sustainable, low-maintenance way of exploiting and terrorising mankind.

Seagull Tom Booker said: “Swooping on ice creams is a mug’s game. What you want is a bunch of bedsits you can let out at an extortionate rate with loads of obscure fees piled on top.

“You still get to make humans feel upset and scared by sending them regular moody letters and turning up for ‘property spot checks’, but you don’t have to sleep in a bunch of shoddily-woven old twigs.

“Now I’ve got a nice place in Kent and an Audi TT. If I want a burger I just order one rather than having to find a discarded McDonald’s box and impale it on my beak.”

Trainee nurse Emma Bradford said: “I rented a bedsit off the seagulls, their office reeks of fish and all the furniture is completely covered in birdshit.

“Also they have these tiny, evil eyes which I think is fairly common among the lettings industry.” 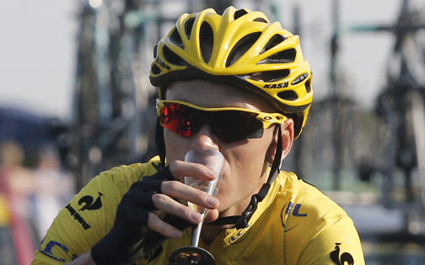 TOUR de France winner Chris Froome has been surprised by how much champagne tastes like urine.

The Briton initially struggled to win over the French public, but thanks to his supreme effort he was greeted at the finish line by locals with glasses of their warm, yellow local drink.

Froome said: “I’m not really a drinker so I’m no judge of these things, but I had expected champagne to be fizzier, colder and not quite as cloudy.

“Apparently though the whiff of ammonia is the hallmark of a particularly fine vintage, and is caused by a particular type of sun on the grapes.

“Also, the victory pate had a similar tang, as did the tarte aux pommes. Obviously Champagne is a cooking ingredient as well as a fancy wine.

“Still, it’s very nice of them, and great to see that we’ve overcome any tired notions of animosity between our two nations.”