Jesus Christ get it off my face, says scientist

THE scientist who discovered a new ferret-like mammal is pleading with colleagues to somehow get it off his face.

Naturalist Tom Logan encountered the fascinating creature when it leapt from a tree, sunk its sharp claws into his cheeks and began frenziedly biting at his features.

He said: “Somebody do something, it hurts so much. Oh God I think it’s got my eye.”

Looking on, Logan’s colleague Professor Henry Brubaker said: “This is a big moment for science. Look at the unique parallel markings on its back.

“No wait that’s Tom’s blood. It must have hit an artery.”

Brubaker said he was astounded by the tiny creature’s boundless aggression: “It’s like every time Tom tries to grab its writhing torso, the animal intensifies its attack, tearing and rending at his flesh with razor-like teeth.

“You’d think it would stop after a bit but it’s really tenacious. The term ‘killing machine’ sounds a bit over-dramatic but I’d say it’s appropriate here.

“Wow it’s really freaking out now. It’s little but it’s all muscle. What’s it doing with his ear? 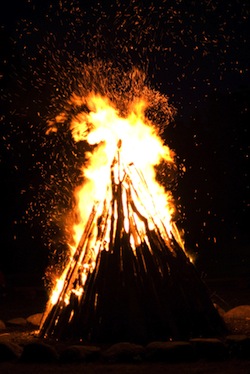 Southampton striker Rickie Lambert scored the winner on his debut, causing mild pleasure for some people who would probably watch the highlights.

Meanwhile, in Small Inexplicably Angry Land, bonfires were lit on mountaintops as the nation renewed its ancient pledge to destroy everything that was big and indifferent.

Lambert celebrated his header by looking as pleased as footballers generally do during friendly matches, while the Small Inexplicably Angry Land defenders stood gaping in horror as they realised they would now be hounded to death by their fellow countrymen.

“I was pleased for Rickie and I hope I can use him in a proper match against an actual team.”

Strachan then walked over to his car, brought out a sledgehammer and went berserk.

Hodgson added: “What’s the matter with him?”