Riots caused by police when they finally turned up 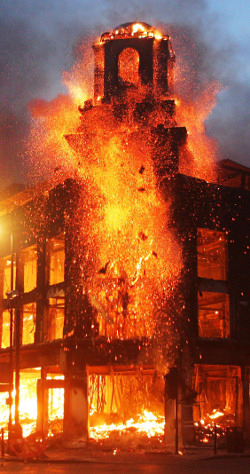 THE August riots were provoked by the people who were nowhere to be seen for the first two days, a study has found.

According to a major survey most rioters said that if it was not for the police not being there they would probably not have stolen quite so many things.

One rioter said: “It was only when the police eventually arrived and prevented me from stealing my ninth Wii in two days that I got very angry and decided to go home and pretend I had been watching television the whole time.”

Another rioter said: “It was like a war against thousands of invisible policeman. It was our chance to take back the streets where we hang around all day, frightening people.

“Also, I’m sick of having my knives confiscated.”

Professor Henry Brubaker, of the Institute for Studies, said: “Given the study was carried out by the Guardian and the London School of Economics, it’s not exactly what we would call ‘scientific’. It’s more what we would call ‘an utter waste of time’.

“The Guardian thinks the rioters are all Robin Hood and that Carpetright is the Sheriff of Nottingham.

“Meanwhile the LSE was, until very recently, a subsidiary of Gaddafi and Sons and specialises in training people who will then spend the rest of their lives being wrong.

“It would have more credibility if it had been carried out by the cast of Hi-de-Hi.”