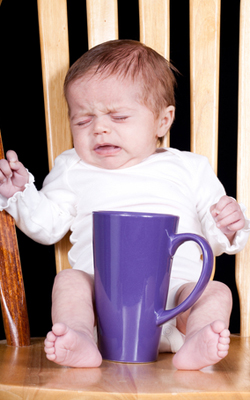 EXPECTANT mothers frequenting high street coffee shops risk passing on Italian traits to their unborn children, it has been claimed.

Medical experts at the Institute for Studies believe that high doses of espresso and cappuccino during pregnancy can produce symptoms including loucheness and horniness in babies.

Doctor Mary Archer said: “Tantrums that are only quelled by the baring of a female breast are a classic sign of infant Italianisation.

“It is predicted that those exposed to coffee whilst in the womb will carry Italianisms into adulthood, such as an overpowering oedipal complex and an unshakeable belief that their national football team isn’t shit.”

She continued: “Unborn Italianised babies are prone to face the vaginal area in a way that is not altogether wholesome.

“However the child of a tea-drinking mother will actually turn its back on the vagina in a dignified English manner. Overall, tea consumption during pregnancy tends to produce well-mannered, sexually-repressed infants with a healthy sense of their own superiority.”

She added: “This cross-placenta phenomenon is not without precedent. 20 years ago it was alright to have a glass of wine whilst pregnant and now we have a generation of workshy student protestors in fitted trousers who are effectively French.”

Coffee whore Nicky Hollis, who drank up to 25 espressos a day whilst pregnant, thinks it made little difference to her now one year old son, Mason.

She said: “Sure he likes to grab the three month-old girls in the nursery and draw hairs on his head with black marker pen, but what kid doesn’t?”