PATRICK Duffy, the Man from Atlantis, is to launch a legal bid on behalf of millions of sea creatures to prevent a Russian takeover of the deep.

The aquatic super-hero will also lead an all-star protest at the bottom of the Arctic ocean alongside the Little Mermaid, SpongeBob Squarepants and four of the turtles from Finding Nemo.

Duffy added: "My family has been farming the sea bed for generations. Admittedly, with no success whatsoever, but you try fitting an aqualung on a cow."

But President Putin insisted Russia had a right to search for new energy reserves. "I need many gas. You like fish. I like fish. But fish no have gas.

"Maybe fish should be shutting face or maybe there be 'accident' at bottom of sea."

He added: "Patrick Duffy better in 'Dallas' though I prefer Hagman. I am Vladimir. You will obey." 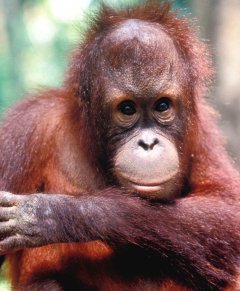 A NEW study of Orangutans has found they can communicate using complex charades with the traditional "stuck in a glass box" mime clearly signalling "let me out of here you bastards".

Repeatedly trying an imaginary door handle, exaggerated looks of puzzlement and frantic searching through pretend trouser pockets means "you've locked me in, let me out of here you bastards", scientists said.

The scientists added that repeated screaming, bearing of the buttocks and hurling of dung is also understood to mean "let me out of here, you bastards".

Dr Wayne Hayes, head of animal behaviour studies at Dundee University, said the Orangutan had a huge number of other charades that the team were now looking to decode.

He said: "We have noticed that whenever we turn up to observe the animals they stand in a row in front of us, form the fingers of their right hands into an 'O”' and then vigorously move their right arms up and down between crotch and waist height while staring at us and hooting.

"It obviously means something but we are not sure what. We are fairly certain though that it is some kind of greeting for friends."

Zuzu, the Orangutan, played down the use of charades by his fellow apes saying they had only resorted to sign language because they were "at the end of their tether".

He said: "We've tried explaining in simple terms that we don't like being locked in a pit and gawped at and that we'd quite like to go home to Sumatra but they just won't listen.

"Frankly, and please pardon my language here, we are all getting just a bit fucked off. As soon as we get a solicitor, you will all be hearing from him."