DRIVERS who can position their car in the middle of a parking space at a supermarket are sliding closer to extinction, conservationists have warned.

Research teams have recorded a sharp decline in numbers over the last decade, despite strenuous efforts to educate the public about how easy it is to just put your fucking car in the middle of a parking space.

Dr Tom Logan, head of species protection at the WWF, said: “There is a series of white lines separated by spaces roughly the same width as a car, plus a little bit more. Let’s think of that as the first Great Big Fucking Clue shall we?

“As we approach, we then have to ask ourselves: ‘do I park on the white line, do I straddle the white line or do I get my huge, chocolate-covered face out of my fat, greedy, unwashed arse and just put the fucking car in the middle of the fucking space?'”

Conservationists have blamed the crisis on a combination of poaching, loss of habitat and an unbelievable fucking selfishness by a bunch of total and complete bastards.

WWF warned that drivers who can park in the middle of a space will soon share the fate of people who knew not to park four feet from the fucking kerb, extinct since 1993.

Dr Logan added: “A fucking mountain gorilla could do this with its fucking eyes shut, but for some reason the average British motorist seems to think every car park in the world was made just for them.

“Or maybe they’ve heard that if they park on the white line Graham-fucking-Norton is going to jump out from behind a bottle-bank and send them on holiday to Orlando.

“Anyway, the point is we need more money.” 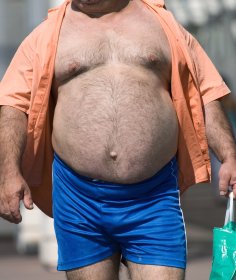 THE NHS is in imminent danger of collapse because skilled staff and vital equipment are being squashed flat by obese people, a new report warns.

Almost 400 doctors and more than 1,000 nurses have died already this year after becoming trapped under giant people demanding treatment for fat related ailments such as heavy sweating.

One entire hospital disappeared into a giant hole earlier this week after an obese family of four were admitted at the same time complaining that their fridge was empty when the building was already overburdened with giant patients.

Sir Derek Wanless, the author of the report, said there was not a single functioning chair left in a hospital or doctor's waiting room because all had buckled under the weight of enormous patients.

He said: “Our only hope now is that these huge bastards become so fat that they cannot get in through the doors of our hospitals and surgeries and so will die in the street like dogs. Otherwise we are buggered.”

Sir Derek said the best possible outcome for the NHS was that most people became so fat they imploded under their own weight leaving a jellied mess on the floor which could easily be swept into the gutters.

Until then he suggested a number of emergency proposals to cope with the current crisis including:

Sir Derek said: “We are going to make the bastards walk to get their treatments, they will lose some weight on the way or expire on the journey. Either way it’s a win-win situation for the NHS.”