THE scientist who discovered how large birds achieve erection
has urged his colleagues not to name it after him.

Professor Tom Logan, of the Insitute for Studies, said there was no reason for the process by which ostriches and other large birds pump their genitals full of lymph fluid to become known as ‘getting a Logan on’.

But Professor Henry Brubaker, the Institute’s director, said: “This represents a huge advancement in our knowledge of avian reproduction. Hats off to Professor Logan, for unlocking the puzzle of big bird erections.

“Consequently, it is only fair that Professor Logan should now be immortalised.

“Myself and all other leading scientists thus decree that a large, sexually-aroused male bird will henceforth be described as ‘having a Logan on’. Or as having undergone ‘Loganisation’ in its phallus.

“Probably over time the word ‘Logan’ will become synonymous with ‘large bird’s penis’.

“Children at zoos will point and say ‘look at that bird’s big red Logan, mummy.'”

Professor Logan said: “Grateful though I am to Professor Brubaker for this flattering suggestion, he is putting me in a situation where I will eventually have to kill myself.

“Although I also slightly suspect that if I hadn’t criticised his recent paper on skin pigmentation in marmosets he wouldn’t be fucking doing this.”

He added: “My advice to aspiring scientists is stick to particles and black holes, stay away from animals in general and animal penises in particular.” 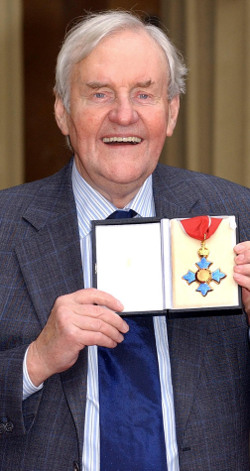 DAVID Attenborough has been faked using lookalikes and special effects for nearly 40 years, the BBC has revealed.

The corporation revealed the role has been played by, among others, David Jason, Richard Briers and Anne Diamond, with ‘David Attenborough’ being a brand name, like ‘Doctor Who’.

As technology progressed, an Attenborough was created by the Jim Henson studio, with eight puppeteers working on his sense of wonderment alone, before CGI technology became sufficiently advanced so it would not look like Max Headroom talking about geese.

BBC producer Bill McKay said: “The original Attenborough died of an infected ball when a chimpanzee bit him in Tanzania in ’72 while he was filming The Hairy Planet.

“Mike Yarwood stepped in for some final bits of voice-over and if you watch the scenes about monkey wanking, Attenborough starts sounding like Hughie Green.”

The BBC finally declared Attenborough’s death to the Inland Revenue under new rules forcing broadcasters to declare their tangible national treasures. The balance sheet has now been reduced to an original Stephen Fry and a mark II Danny Baker.

McKay added: “Nowadays we’ve got the CGI Attenborough that we can put in front of a volcano, an iceberg or in the midst of a walrus mating session. And for the staff Christmas party one of the lads programmed it to do the Beyoncé dance to Single Ladies.