OPPONENTS of solar power have been having an excellent morning.

The renewable energy skeptics made the most of a once-in-a-decade opportunity to cluck and hoot in derision at solar panels between the hours of 8.30 and 10.30am.

Julian Cook said: “For the last two hours I’ve been able to harp on about how solar power was always going to end in tears.

“I’ve been burning some coal I carry around with me to generate my own power – proper old-school power.”

He added: “This whole ‘sun’ fad was always going to die out. Imagine trying to get energy from a ball of hot plasma with a mass 330,000 times that of Earth.

Journalist would kill everyone in room for heartwarming story 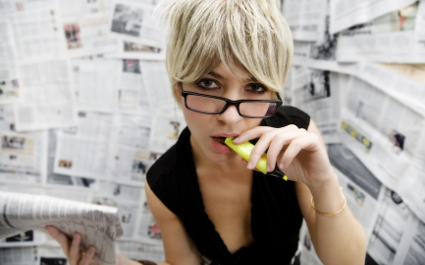 A NEWSPAPER journalist has admitted she will stop at nothing, including murder, to get an uplifting human interest story.

Emma Bradford revealed she has been unable to find any triumphs against adversity, quirky quests or mayors with unorthodox second jobs for nearly 48 hours.

She said: “With all due respect to ISIS, they’re not exactly a packet of crisps that only contains one giant crisp.

“Is it too much to ask for a blind man to win an F1 race or a dog to bark a passable version of Adele’s Someone Like You?

“Right now I’d sever my own arm for a pensioner who’s hopping the length of Hadrian’s Wall for charity.

“And if I can’t find a family who celebrate Christmas every weekend soon, I’ll force one at gunpoint. I’m going viral if it’s the last thing I do.”

Bradford’s editor Tom Logan said: “When I was a young hack I didn’t sit around waiting for 62-year-old tins of Spam that were still edible to come to me.

“My story about six artificial limbs being left on the Tube in one day made my career. Nobody ever found the bodies.”