THE ball-wrenching tediousness of climate change pundits is worse than previously thought, it has been claimed.

Experts believe the Intergovernmental Panel on Tiresome Climate Change Articles has drastically underestimated the rate at which people were becoming angrily bored by all this.

Professor Henry Brubaker, of the Institute for Studies, said: "Previous computer models suggested someone like George Monbiot would only make you want to chew your own elbows off or stick your bum in a bucket of bees.

"But now all the data points towards Monbiot and Monbiot-fuelled activity forcing millions of people to leap from high buildings while battering themselves to death with a heavy frying pan all the way down, just to make sure."

Annoyed consumer Bill McKay said: "Let me think, how should I put this? Oh yes…WE FUCKING GET IT, OKAY?

"Yes, there's too much CO2 but until we stop burning great big lumps of stinking coal to make the electricity we need to read your boring shit on the internet, there's really not much else to be said about it.

"Range Rovers, easyJet, plastic bags, it's all very fascinating, but let's not allow ourselves to be distracted from the thousands of the gigantic power stations filled to the rafters with manky black stuff, shall we?"

Mr McKay added: "I don't suppose there's any chance we could burn you?" 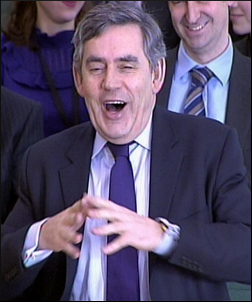 GORDON Brown last night ordered his minions to fetch him a fresh bank.

The prime minister has grown bored in recent days and has told friends that only the comprehensive destruction of a great financial institution will banish his ennui.

A Downing Street source said: "Oh, how he does love to fuck-up a bank. It's the only thing getting him out of bed these days.

"He'll trudge into the office, gaze out of the window and ask, 'are there no new banks to destroy?'. And then we'll apologise and he'll look all sad and disappointed and his bottom lip will start to wobble. It breaks your heart.

"But oh, you should have seen him the other day when his Lloyds plan finally came off.

"We all gathered round the telly to watch the share price plummeting while the prime minister bounced up and down in his chair, clapping his hands and giggling."

The source added: "He's totally perplexed at how HSBC have come through all of this virtually unscathed and he really wants to see them suffer.

"He's talked about forcing them to buy RBS, the rotting, leftover bits of MFI and the old Rover plant at Longbridge and then sitting back and 'watching the fun'.

"And as for Barclays, well he really wants to wait until all of this is over and they think they're safe and then he's going to blow them to bits with a tank."