Things that live in the sea found off British coast

BRITAIN’S coastal waters are being invaded by sea-dwelling creatures.

Sightings of jellyfish, dolphins and other forms of marine life may be evidence that UK waters are a destination for species adapted to travel through water.

Office worker Tom Logan said: “I was paddling in the sea when I realised it was full of little fish, fucking loads of them just swimming around.

“There was a small armoured thing too, with little claw-like hands that you might call ‘grabbers’, and something shaped like a star. I got out as fast as I could.

“I thought the sea was supposed to be a safe, empty place.”

Project manager Norman Steele found a jelly-like thing in a rock pool: “Thinking it was delicious lemon jelly from someone’s picnic I picked it up and had a bite, at which point my head swelled up very considerably and my airways became blocked.

“I just don’t understand how it got here. Maybe it escaped from a millionaire’s petting zoo?”

Britons have also reported seeing ‘water labradors’, thought to be seals, and ‘sea goblins’, which could be any sort of fish. 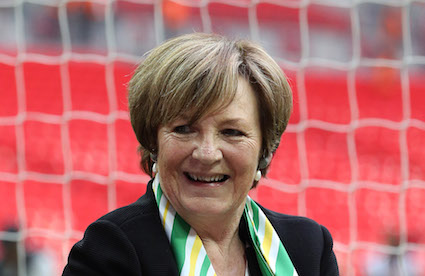 NORWICH City owner Delia Smith has turned down the club’s promotion, insisting the Premier League is too fancy.

Smith said the Championship was a ‘lovely, comforting league, a bit like a Victoria sponge’ and has offered the promotion to Middlesbrough instead.

Smith said: “As well as having our arses continually handed to us – we only came third in a division that includes Rotherham – we’d have to play against all those dreadful people.

“Marouane Fellaini? I’d rather drink my own urine.”

She added: “Also, we’d have to go to big, scary places like Manchester and Liverpool. What if we got really pissed and the bus left without us?

“Perhaps when the top flight once again includes Leeds, Notts Forest and Coventry we might consider it, but at the moment it’s not really our cup of tea.

“And of course, winning promotion then turning it down will absolutely infuriate Ipswich. Bunch of twats.”