GLOBAL warming has caused an acceleration in evolution that should see the world overrun by 20ft mice within 10 years, scientists said last night.

Experts at the Institute for Studies said that by 2019 the first wave of giant mice will be kicking down our doors and demanding huge lumps of cheese in terrifying, stentorian voices.

Professor Henry Brubaker said: "We believe that if we accede to their demands the mice will do us no harm. Though they may accidentally chew through a couple of pylons from time to time."

The Institute's projections show that by 2030 the East Midlands will be ruled by a ruthless gang of land-based sticklebacks with a penchant for kneecapping, while rural communities around Totnes in Devon will be fighting a desperate rearguard action against one gigantic moth.

Professor Brubaker said: "Our research shows that warmer temperatures increase evolutionary change. Over the last three years we have discovered that Godzilla was from Japan, not Sweden. And we were also able to prove conclusively that King Kong was captured in the tropics.

"Of course, this also means that colder temperatures mean slower evolution. Get on a train to Aberdeen and then tell me I'm wrong."

The study discovered that certain species of Amazonian parrot had grown by eight percent over the last decade, while one field researcher woke up to find himself surrounded by a gang of six-foot tall dung beetles armed with Word War II rifles.

Professor Brubaker admitted that global warming did pose 'moral dilemmas', adding: "While millions in low-lying areas will drown, those that remain will soon be able to dance and sing with super-intelligent orang-utans. All of us, jungle VIPs." 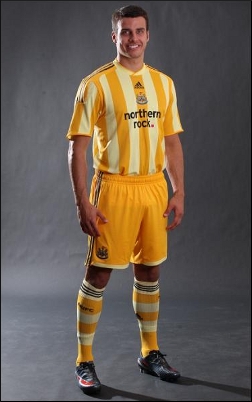 THE Newcastle United board has decided to alienate its few remaining fans with a new away kit that looks like a boiled sweet made from urine.

The kit was designed by lifelong Sunderland fan Tom Logan, who said he spent weeks searching for just the right shades of yellow.

He added: "I wanted something that said 'piss', but combined both the pale yellow of a poor person who drinks too much with the dark yellow of a person who buys rich food that they can't really afford."

The kit will go on sale next week, priced to meet the value for money expectations of gullible, colour-blind halfwits.

Meanwhile the board hopes its latest move will constitute the final straw so the club can finally be wound down and sold off at a car-boot sale in Whitley Bay.

He added: "It's been tough – re-employing Keegan, absurdly expensive season tickets, Dennis Wise – but this should finally enable me to flatten St James's Park and use the land for raising goats."

Defender Steven Taylor, who modelled the strip, said: "This is possibly the biggest tit I've felt since joining Newcastle, and I spend most of the season being dumped on my arse while the opposition hoof the ball into the roof of the net."

Newcastle fan Martin Bishop added: "I've followed the Toon since Jackie Milburn but if I go around wearing that, people will automatically think I've just escaped from a parade that celebrates alternative lifestyles."