UNSIGHTLY wind turbines have attacked a school near Swindon, leaving a trail of dismembered corpses in their wake.

The so-called renewable energy devices went on the rampage after they were struck by lightning during an electrical storm, causing them to become animated with a malevolent lust for human blood.

Local resident Nikki Hollis said: I dropped my kids off at school when suddenly there was screaming. Looking up, I saw about fifteen wind turbines hopping over the horizon, their blades dripping with red.

Anyone in their path was being stomped or cut to ribbons. The turbines were making a high-pitched whirring sound which I believe was their hellish laughter.

It seemed that they really wanted the children. Perhaps because their blood is fresher.

We crowded the kids into the school hall, barricading the doors and windows. Unfortunately the headmistress Mrs Gerving was too old and slow, probably, so we left her outside.

I remember seeing her spleen bounce off the window. Thankfully she was a spinster, so no-one will mourn her death.

Six hours later police marksmen arrived and shot the turbines in their motors.

Im not against renewable energy per se, but Ill never forget emerging from that school and seeing the playground sprayed with slivers of human meat.

Following the incident, residents feel vindicated in their initial opposition to the turbines, which was ignored by the local council.

Post office manager Tom Logan said: We always felt those things would kill if they could. More importantly, theyre ugly.

We shall be having a meeting about this next Thursday at the scout hut, and have invited a photographer from the local paper. Its really just so that everyone knows we were right. 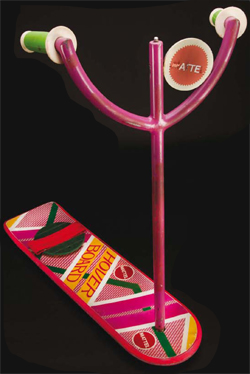 THE project to create the technologies and trends of Back to the Future II is now more than 18 months behind schedule.

The ambitious sequel screened in 1989 served up a positive and realistic vision of 2015 which was enough to convince investors to back the scheme.

But with less than three years to go hoverboards, food hydrators and neon golf visors are still stuck on the drawing board.

Despite the setbacks, Back to the future II chief executive Tom Logan remains optimistic about meeting what many now consider an impossible deadline.

He said: “I assure you come October 2015 the world will be ready. Yes weve hit some snags but the framework is in place.

“Take a look at the sky. Youll see that the mid-air freeways have been built, now all we need to do is invent and popularise the flying car so theres something to run on them.”

The project has already been under scrutiny for investing too heavily in the development of a holographic shark only to see the Jaws franchise they were intended to promote collapse after the one that Michael Caine was in.

Logan insisted: Can we invent self-drying jackets or self-fastening trainers? No we cannot. But cameras everywhere and in-your-face advertising on anything with a screen? That we can do. Even if there is no demand for it whatsoever.

Logan has now appealed for a second round of funding, adding: To make this work we need money. And by money I mean cash, not some unrealistic database currency where you pay with your thumb. Thats never going to happen.

I assure you this project wont be a repeat of the failed Space 1999 committee, and that if we dont deliver on our Back to the Future II promise, I will eat this double neck tie.