CONSUMING fast food on a train is more offensive than open public urination, passengers have agreed.

A survey found that someone emptying their bladder in the middle of a crowded carriage would be both shocking and inconvenient, but could not possibly be as unpleasant as someone devouring a nasty mix of processed meat and cheese.

“A public urinator who can no longer wait for the only lavatory on the train to become available would deserve some measure of sympathy.

“A man stuffing a bacon double cheeseburger into his so-called face on the 17.23 to Finsbury Park deserves to be thrown off the train and then chased by some big, angry dogs into a scary forest.”

Cheeseburger eating commuter Nathan Muir said: “In my defence, I am also drunk.” 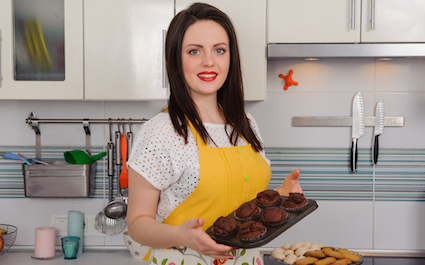 A WOMAN has saved hours a week she used to spend on baking by just going around begging people to like her, she has revealed.

Emma Bradford, 33, arrives at all social occasions with a batch of cupcakes she claims to have ‘whipped up for fun’, when in fact they are a byproduct of her crippling self-loathing.

She explained: “I’ve been telling everyone I’m a keen amateur baker and that they’re doing me a favour by trying my recipes, but the obvious truth is that I’m desperate for approval.

“But at a works do I found myself without my shield of baked goods and instead stammered ‘Please like me, I’m so afraid of being unpopular’ and it worked just as well with a lot less measuring and mixing and shit.

“I was trapped on the lonely road that leads to Bake-Off, making a doomed attempt to win validation from the entire nation because I was bullied a bit at school, but I’ve found a quicker way to boost my self-esteem.

“I’m taking back control of my life and will stop trying to win affection with cakes. From now on, I’m doing that with pleading.

“And hand-knitted gifts for special friends, just to make sure.”