THE hardest part of going vegan during January is not being a complete and utter pain in the arse about it, it has emerged.

Veganuary participants agree that a lack of meal options or discovering that milk is in everything pales in comparison to the difficulty of not being a boring irritant about their diet.

Temporary vegan Josh Hudson said: “I fell off the wagon on day one when I whinged about the dryness of a Co-Op falafel wrap. On reflection, telling my girlfriend about it for a full 15 minutes was probably too much.

“And of course in the rare moments when you’re not hacked off with veganism, you drone on tediously about how much healthier you feel while meat-eaters are stuffing their bodies with toxic animal gunk.

“Getting through Veganuary without being annoying was so much easier when it didn’t exist. Back then you couldn’t complain that Greggs had sold out of vegan sausage rolls because they simply didn’t cater to us.

“Nowadays you can be a right misery about the blandness of your endless tinned tomato-based meals, the pressure to go full-time from hardcore vegans, and even the word Veganuary itself, which you’ve got to admit is pretty embarrassing.

“If only I wasn’t forced to do this every year by society and was instead free to make my own eating and lifestyle choices. A man can but dream.”

The dog walker's guide to pissing off other pedestrians 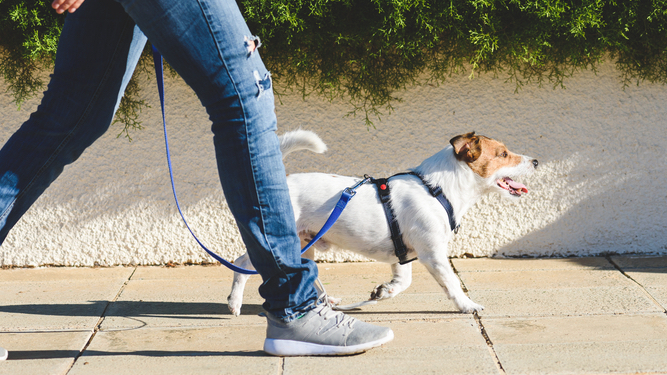 ARE you worried you’re not annoying enough people while walking your canine chum? Our handy guide will put that right.

Don’t bother with a lead

Dogs are meant to run free. Why have them tied up when they can be jumping on nervous people who don’t like dogs? All you have to say is ‘Don’t worry, he’s friendly’ and it’s fine. Also your four-legged pal can run out into the road, giving drivers a chance to practise their emergency stop.

Be a pest with a ball

A ball is a lovely, healthy toy for a dog, and in the right hands it can annoy humans too. Wait until someone has walked past you to give the impression you’re considerate, then launch the ball in their direction and watch them shit themselves as your dog races at them in a state of crazed excitement.

Go out in the dark

Going out late at night limits the number of people you can piss off, but it also means you can go into stealth mode for more impact. Unless you have absolutely no sense of embarrassment you won’t have one of those ridiculous flashing collars, so the first time people will know there’s a dog about is when it creepily appears from nowhere to lick their hand.

Don’t waste your time shouting instructions that your dog will probably ignore anyway. Let it roam free along the cycle path, annoying and intimidating as many people as it likes. This isn’t irresponsible dog ownership, it’s just letting your pooch get in touch with its rich heritage of being a wild animal.

Use an extendable lead

This may seem to contradict previous advice, but not if it’s a massive extendable lead at full stretch, meaning you effectively have no control over your dog. Even extended by only a few metres, it’s an excellent trip hazard on busy streets. Gaze obliviously at shop windows while your dog forces people off the pavement and into the path of oncoming traffic.