A MAN’S dinner tasted like shit after he decided to improve the recipe by throwing in random ingredients.

Julian Cook, buoyed along by three cans of Stella, believed himself such a culinary natural that he inexplicably added various herbs and spices from the back of the cupboard to Jamie Oliver’s chicken tikka masala.

Wife Beverly said: “He was stood there adding a a pinch of this and a spoonful of that like he’s Gino bloody D’Acampo.

“He just kept on tossing things into the pan with a gleeful flick of the wrist, like some kind of a psychopathic chef making his own last meal.”

Julian said: “The recipe only had a few ingredients, I mean a child could have made it, so I thought I’d spice things up a bit.

“I added a pinch of basil, some paprika, a few spoonfuls of Tabasco and something called star anise. That’s what real cooks do. They go with the flow. 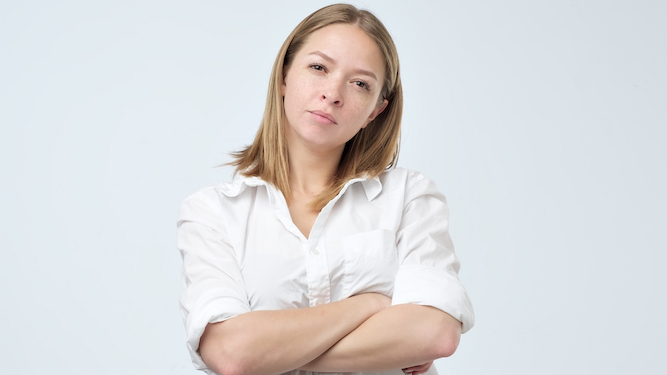 A WOMAN who has not found anything positive in any aspect of her life or the world since 2014 has blamed it all on her period.

Charlotte Phelps believes her unrelentingly negative attitude and vindictive personality, with which she has punished friends and colleagues for years, are entirely down to pre-menstrual syndrome.

She said: “Nasty, uncaring people, which is most of them, say I’m not kind or understanding and that my behaviour verges on cruel. Which is unfair.

“Alright, I do get a bit ratty in the week before my period. Probably because I feel bloated. And I’m not great the week after because I’m hormonal, and I can be a right cow when I’m ovulating.

“But to victimise me because of my very womanhood is just horrible, so I’m entirely justified in pre-emptively lashing out at anyone judging me. It’s not my fault. It’s my period.”

Friend Helen Archer said: “Never mind. We’ll probably get a couple of breaks when she decides she’s being vile because she’s pregnant instead, then a good decade where she’s foul due to menopause.”