Six unbelievably trivial things you cared about six months ago

IT’S fair to say 2020 has given us all a bit of perspective. Which is probably for the best, because back in January you gave a shit about these things:

You matched, you flirted, but you never really knew how they felt. The bigger crime is that you wasted the last weeks of Covid-free shagging chasing this loser when you could have been knocking off someone who was at least up for it, even if they were sort of ugly.

But how does William feel? But how does the Queen feel? But will they still have HRH titles? This genuinely counted as earth-shattering news when it happened. Now they’re just two more celebrities we resent seeing on Skype calls.

Have your clothes shrunk or was it all those Quality Streets you stuffed into your face? Either way, you’ve got plenty of time to burn that fat off. It’s not like you’re going to be stuck indoors on your arse eating crisps and boozing for the whole year.

Boris Johnson’s been elected prime minister! He’ll cut NHS budgets, when they’re already overloaded with debt, to the bone! Or he’ll forgive all their debts and shovel in so much cash that an extra £3 billon of winter funding barely makes headlines.

Actually this one’s still a legitimate concern, with only five months left to iron out a negotiation or repeat all those bewildered-pensioner-in-empty-supermarket photos. But at least our benevolent leader is beavering away on it without anything diverting his attention. 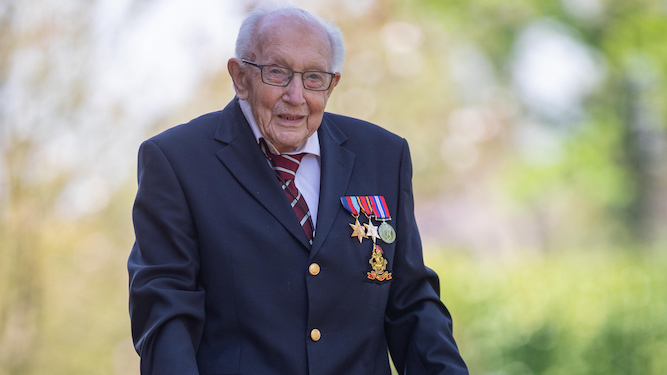 CAPTAIN Sir Tom Moore has admitted that his fundraising walk around his own garden was only completed using Heelys.

The war veteran, due to receive his knighthood from the Queen today, confessed that he used the wheeled shoes to make his charity walk easier and should really hand the money back.

He said: “It was only intended to raise a few hundred quid. I didn’t think anyone would notice.

“I’m 99 years old, for Christ’s sake. You can’t expect me to endlessly walk around my own garden without a bit of help.

“Every time the press popped round to film me I made sure it looked like I was making an effort. But when the cameras stopped rolling I threw my walking frame aside, leant back on my heels and coasted my way to the target.

“As the donations shot up past £100K I started to worry. Lying to GMTV’s one thing, everybody does that, but lying to the monarch of the realm? Unforgivable.”

Her Majesty said: “Bloody Heelys? Sickening. On reflection, it would have been better if Hitler won the war.”