THE shelves of upmarket supermarkets have been swept clean by panicking shoppers stockpiling brie and cranberry tartlets, retailers have warned.

The aisles of Waitrose, M&S and Booths are crowded with well-to-do consumers filling their trolleys with enough king prawn lollipops, sweet potato katsu bites and crispy duck straws to last until June.

Sweating shopper Julian Cook, who owns an IT consultancy, said: “I’m not stockpiling. I need all 30 boxes of these wild mushroom and parmesan vol-au-vents for my family.

“As soon as I heard the words ’48-hour French blockade’, I knew we’d soon be desperately low on finger foods and it was every man for himself.

“I managed to get three wheels of Canembert, a good supply of caviar-smeared blinis and enough lobster thermidor spring rolls to see us through until amuse-bouche supply lines are up and running again. It’s like a second Blitz.”

Mary Fisher had been self-isolating until she heard that a highly contagious new strain of Covid might get between her and a festive kilo of Jamón Ibérico from Waitrose’s deli counter.

She said: “I got straight down there. A choice between protecting society from Covid and six pork and ‘nduja croquettes is no choice at all.”

Putting on a panto, and four other activities if you're stuck in a lorry in Kent 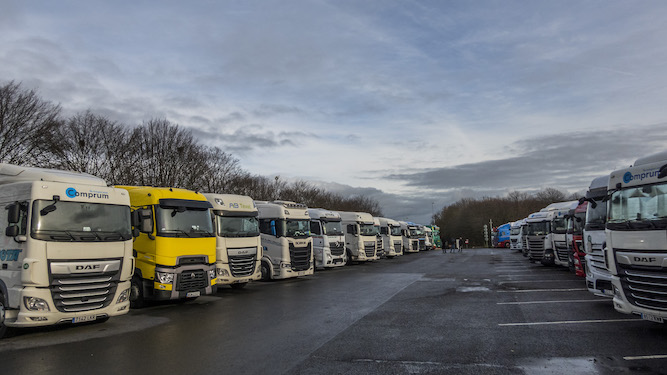 TRAVEL restrictions may have been eased, but queues and Brexit mean the average HGV driver will still see Christmas in on the M20. This will pass the time:

Exchange mystery presents with other stranded hauliers by dippng into the back of your wagon and wrapping up whatever you find there. Just watch your new Romanian friend’s face light up when he opens a Land Rover fanbelt and gives you a live sheep in return.

Put on a pantomime

Nothing raises spirits like a festive production of Jack and the Beanstalk. Commandeer a flatbed truck for the stage and start auditioning. But when the 6ft 8in former mercenary dude from Moldova asks to play the dame, let him.

With insufficient toilet facilities and food, it’s time to take action and form a functioning administration in a country that’s clearly without one. This will inevitably split into two rival groups, culminating in an armed conflict like a gritty Shane Meadows version of Lord of the Flies set near Ramsgate.

As a multinational gathering with time on hour hands, you’ve a great opportunity to pick up a new language. By the time you get moving again you’ll be able to say ‘Do not go to Britain. Kent is a toilet,’ anywhere between Moscow and Lisbon and be understood.

Someone’s bound to have a football, so why not beat UEFA to it and stage Euro 2021 in a farmer’s field? With thousands of drivers parked up from all over Europe, you’ll easily get full teams for all participating nations. TV audiences would be massive too as there’s bugger all on this Christmas except repeats.