A SOPHISTICATED Northern diner has asked to see the list of available sauces rather than just plump for the house red.

Roy Hobbs surprised Donna Sheridan with his cosmopolitan self-assurance when he took her out for a meal that didn’t come wrapped in newspaper.

Sheridan said: “I didn’t expect Roy to be so classy but rather than just asking for tomato ketchup he insisted on seeing the sauce list and then talked me through it, explaining all the regions and flavours.

“To compliment my cheese and ham toastie, he said a dollop of full-bodied HP would pair well with the savouriness of the meat, and a dash of spicy Worcestershire would enhance the piquancy of the cheddar. Which it did, exquisitely.

“I had a lovely time. Roy was charming and considerate, and I found his confidence with sauces arousing. Unfortunately, though, we didn’t kiss because his garlic breath was rank and being anywhere near him made me physically heave.”

Mate you haven't seen for 20 years still a massive twat 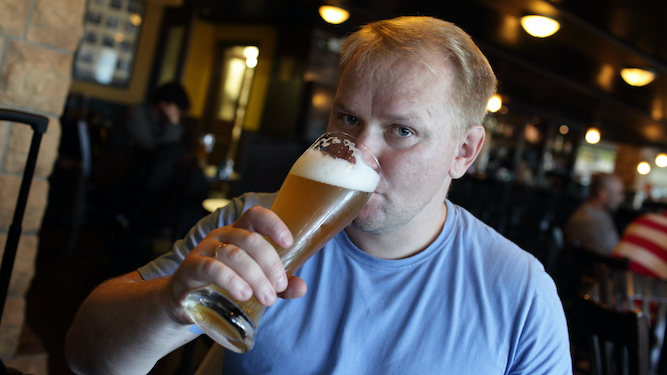 A MAN who met up with a friend he hadn’t seen for two decades was disappointed to find he is still an utter dickhead.

Stephen Malley agreed to meet former colleague Nathan Muir after receiving an email out of the blue asking if he fancied catching up, but failed to recognise the red flag of Muir suggesting they ‘get totally wankered at Spoons’.

Malley said: “He managed to crack a racist joke before I’d even sat down, and rolled seamlessly into reckoning he fancied our chances with two women minding their own business at the other end of the bar. We’re both married, but that didn’t seem to bother him.

“The last time I saw Nathan was in 2001, when sexist comments and casual racism were commonplace. The rest of the world has moved on but sadly the only way Nathan has evolved is to become even more of a bellend than he used to be.”

Muir said: “It was just like old times seeing Stevie-boy again, even when I vomited in the gutter at the end of the night.

“Mind you, he’s turned into a right humourless bastard. And he had no interest in cracking on to a pair of fit birds in the pub, so I reckon over the years he must have gone gay. It’s the only explanation.”